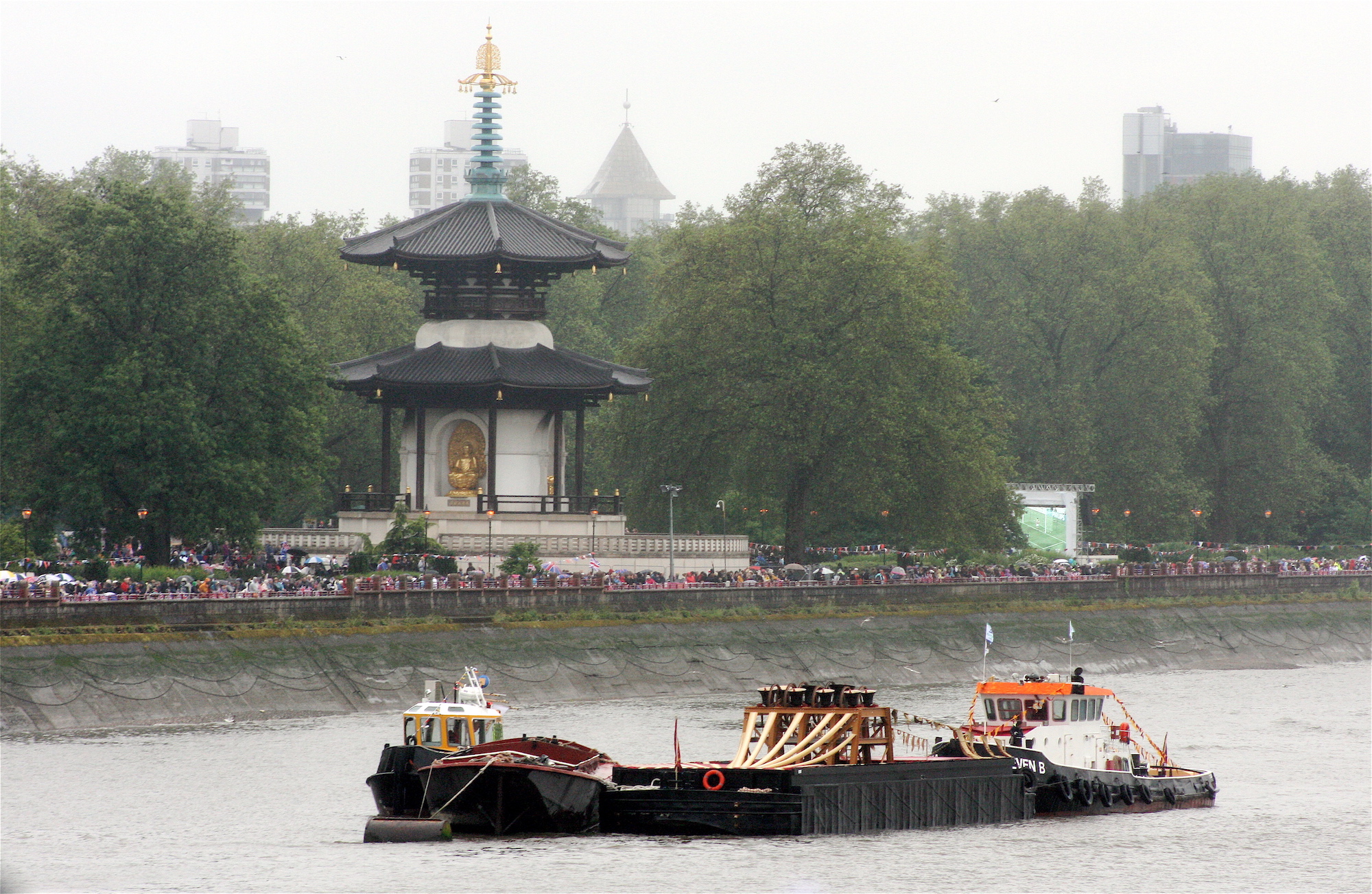 Opening with the Battersea Park Peace Pagoda, one of the varied works of art to be found along the central London Thames, I’ll be zigzagging downstream across the river in space and time with photographs of some of the work that has caught my eye.
The Peace Pagoda in the photograph above was given to London in 1984 by Nichidatsu Fujii a Japanese Buddhist monk, who in 1947 began the construction of Peace Pagoda shrines around the world. Taken on June 3, 2012 this photograph, on the occasion of the Queen’s Diamond Jubilee, shows a barge below the Pagoda carrying a new peal of bells destined for St. James Garlickhythe, before taking her place at the head of the Thames Jubilee Pageant to Tower Bridge.

A naked, muscular, mythical Old Father Thames, throwing his weight around among creatures unlikely to have been found in the river. However, since the Thames was declared to have been “biologically dead” in 1958, by 2020, after sustained conservation efforts, the Zoological Society of London, reported that 125 species of fish had been listed and that life has returned to the river. Mammals have returned as well, particularly seals and, as some of you may remember, a whale made its way upstream in 2006, but sadly died after a concerted rescue attempt. So perhaps Duncan’s bas-relief is true to the natural history of the river after all.

Pottery is one of eight sculptures decorating Vauxhall Bridge, my favourite, and her air of quiet contemplation seems to give an aura of calm over the constant movement of the tides. She stands there in recognition of the famous Doulton’s Lambeth Pottery which was nearby.

DeCaires Taylor’s ‘Rising Tide’ sculptures installed on the Lambeth Reach foreshore for a just a month in September 2015, were topical then and even more so now. Pumpjack, nodding horses’ heads and figures representing the hope of young people contrasted with the indifference of businessmen, were twice daily slowly immersed in the river with the rising of the tide.

Set close by Vauxhall Bridge for some time, Peter Randall-Page’s sculpture ‘Shapes in the Clouds II’, carved from Rosso Luana marble, caught my eye as its whirling mass of shapes are often echoed by the different cloud reflections swirling in the currents of the Thames below.

‘Love, Aluminium’ by Lorenzo Quinn was installed in 2017 and stood gleaming for a while on Millbank’s Riverside Walk Gardens.

Set on the banks of the Thames with views across to the Palace of Westminster the memorial to Basaveshwara celebrates his advocation, far back in the 12th century, of what were to evolve as “core British values of freedom of speech, respect and tolerance.” Values now under threat these days and needing more than ever to be upheld.

Henry Moore’s powerful, chunky ‘Locking Piece’ 1963-4, on loan from the Tate Gallery, overlooks the Thames and a landmark *government* building on the far shore.

One of the sculptural reliefs by Gilbert Bayes, adding mythological glamour to the restrained brickwork of No. 8 Albert Embankment. See more with a click here.

Watching over the Thames close to Lambeth Bridge, the sailor on Michael Sandle’s monumental sculpture is poised to help moor his ship. The sculpture stands in the entrance of The International Maritime Organisation headquarters on the Albert Embankment. To discover more see here.

Looking across from Lambeth Bridge, the National Covid Memorial Wall gives an illusion of colourful normality but it’s only when you get close to it that you notice the thousands upon thousands of individual hearts, each one in memory of a cherished family member or friend whose often lonely death from Covid, has touched all those around them.

One of the hundreds of bronze lion’s heads sculpted by Timothy Butler in 1868. As many of you will know, the saying goes “When the lions drink, London will sink” and other versions of the same idea progress to: “If water’s up to their manes, we’ll be going down drains; and also, If the lions are ducked, then London is f…” That might have been true initially but the embankments were raised after London was flooded with loss of life in 1928, and though water levels have risen, London is for the moment protected by the Thames Barrier.

Both the Buxton Memorial above and Rodin’s sculpture of the Burghers of Calais in the picture below, stand in Victoria Tower Gardens, adjacent to the Palace of Westminster, a World Heritage site next to the Thames. Sadly the future of the Gardens is still uncertain… Click here to discover their history and why keeping them open for all is so important.

The ‘dolphin’ lamps designed by George Vulliamy, can be seen between Vauxhall and Blackfriars Bridges on the South Bank, and along the Victoria Embankment on the north side of the river. See here for more detail.

Violette Szarbo’s exceptional courage in WW2 as a member of the S.O.E. earned her the posthumous awards of both the George Cross and the Croix de Guerre. Her bust is set at the top of a monument dedicated to the selfless courage of all those who served in Churchill’s ‘Secret Army’, from where she looks out across the Thames to the Palace of Westminster. Made of bronze she was sculpted by Karen Newman. On the plinth below is a tribute to “all the courageous S.O.E. Agents: those who did survive and those who did not survive their perilous missions. Their services were beyond the call of duty. In the pages of history their names are carved with pride.” Discover the Violette Szarbo Museum and read her story here. See the unveiling of the Memorial by the Duke of Wellington here.

Family members and passers by wonder at these sad heart tributes to victims of Covid. Composer Mark Ward’s words seem appropriate here: “A storm of souls is battened on silence in the sky, begging for remission and another chance to die.” © Mark Ward, 1986.

And lastly in Part I, there is the bronze statue of Boudicca, her daughters crouching forward on either side, as she leads her attacking forces towards the Roman occupiers in 60 AD. Her statue was designed by sculptor Thomas Thornycroft, and Prince Albert and Queen Victoria were said to have been “closely involved […] Prince Albert even lent Thornycroft horses from the royal stables to act as models for Boudicca’s horses”. However, for various reasons, including finance and debate about the choice of a site, the commission took a long time to complete and Thornycroft died in 1885. Obstacles eventually overcome, his son, Sir John Isaac Thornycroft finally presented the statue and Boudicca was installed above Westminster Pier.