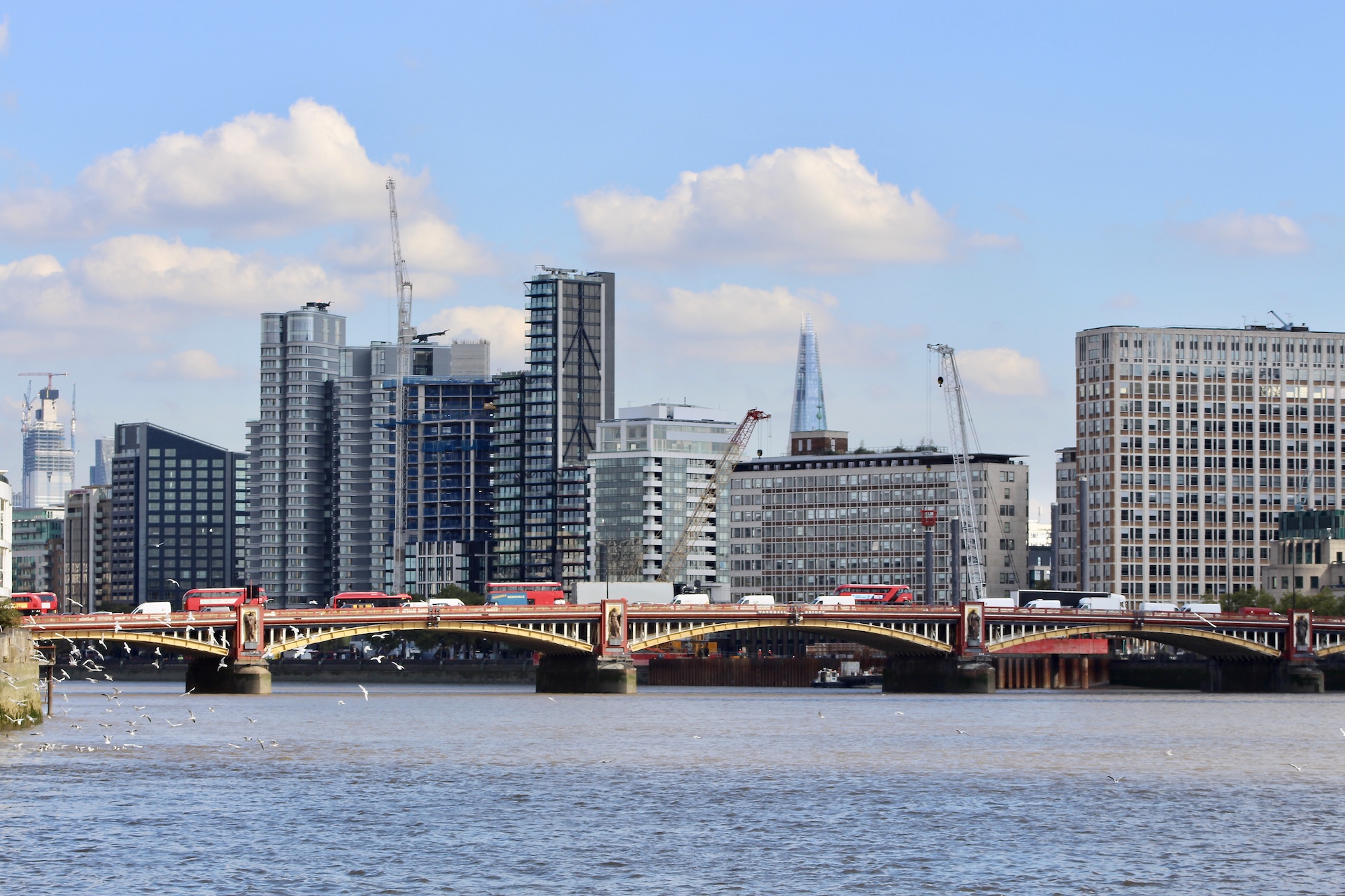 Out of sight to road users…

…and mostly ignored by river users focussed on navigating safely through the arches, Vauxhall Bridge has eight large bronze statues, four on each side, allegorical figures representing, Science, Fine Arts, Education, Local Government, Agriculture, Architecture, Engineering and Pottery. Commissioned by the London County Council, they were installed in 1907.

The sculptures are mounted on plinths in alcoves set upon the bridge piers but being below the level of the parapet, they are invisible from the roadway. The best full views are from the river but the safest views are from the embankments, so as not to obstruct river traffic, though they are further away and more difficult to see. A good way to study them in detail is to use a pair of binoculars. Leaning over the parapet for an even closer look at the heads is possible but only with care.

The sculptors, Alfred Drury and Frederick Pomeroy, were part of what was known as the New Sculpture movement, which came into being during the late nineteenth century. The Victorian Web states that the movement “does not represent one singular style, but rather a range of approaches to make sculpture more dynamic and life-like.” Both Drury and Pomeroy were known for their architectural sculpture, and the approach to the statues on Vauxhall Bridge, though coming from their background of structural ornementation, resulted in the creation of symbolic, yet more natural-looking figures with thoughtful faces and a feeling of movement in their demeanour and flowing draperies.

Above is an interesting photograph of Vauxhall Bridge with its empty niches before the installation of the statues. And below is the scene on the bridge as the statue representing the Fine Arts, holding a sculptured figure and an artists’ palette, is raised into the air before being lowered over the parapet into position. About twice life-size, she is cast in bronze and weighs, as do all the statues, around two tons.

The upstream statues by Frederick W. Pomeroy, RA (1856 – 1924)
Pomeroy was one of the leading sculptors in the New Sculpture movement, with works around Britain and in London, including the impressive figure of Lady Justice on the dome of the Old Bailey, erected in 1906. It was he who undertook the commission for the four statues on the upstream side of the bridge.

Follow a link to the history of the Royal Doulton Pottery here.

The downstream facing statues by Alfred Drury RA (1856 – 1944)
Drury was, like Pomeroy, an architectural sculptor. He too was part of the New Sculpture movement creating several works in central London, and others all over Britain including the eight elegant bronze lampholders in Leeds Square, called the Morning and Evening Girls. He took on the commission for the four downstream facing statues.

Here below are a few images of boats that pass regularly beneath Vauxhall Bridge, where skippers will be more concerned with navigation than observing the finer details of the sculptures. If you take any of the boat trips upstream be on the lookout with cameras and binoculars at the ready as you approach and pass beneath Vauxhall Bridge.

Vauxhall Bridge was in line to be the next London bridge lit up as part of the wonderful Illuminated River public art installation already stretching across nine central London bridges. However plans to proceed with the work have been put on hold for the moment due to funding problems but Leo Villareal’s artwork is already completed and ready to go when possible.

In an article quoted by The Victorian Web, architect Sir Reginald Blomfield wrote in 1921 that it was important for a bridge to be “a symbol of the life and civilization of the people who use that bridge”. Though this could not be said of all bridges by any means, Vauxhall Bridge’s statues do remain a symbol of pride in the achievements of the age when it was built.