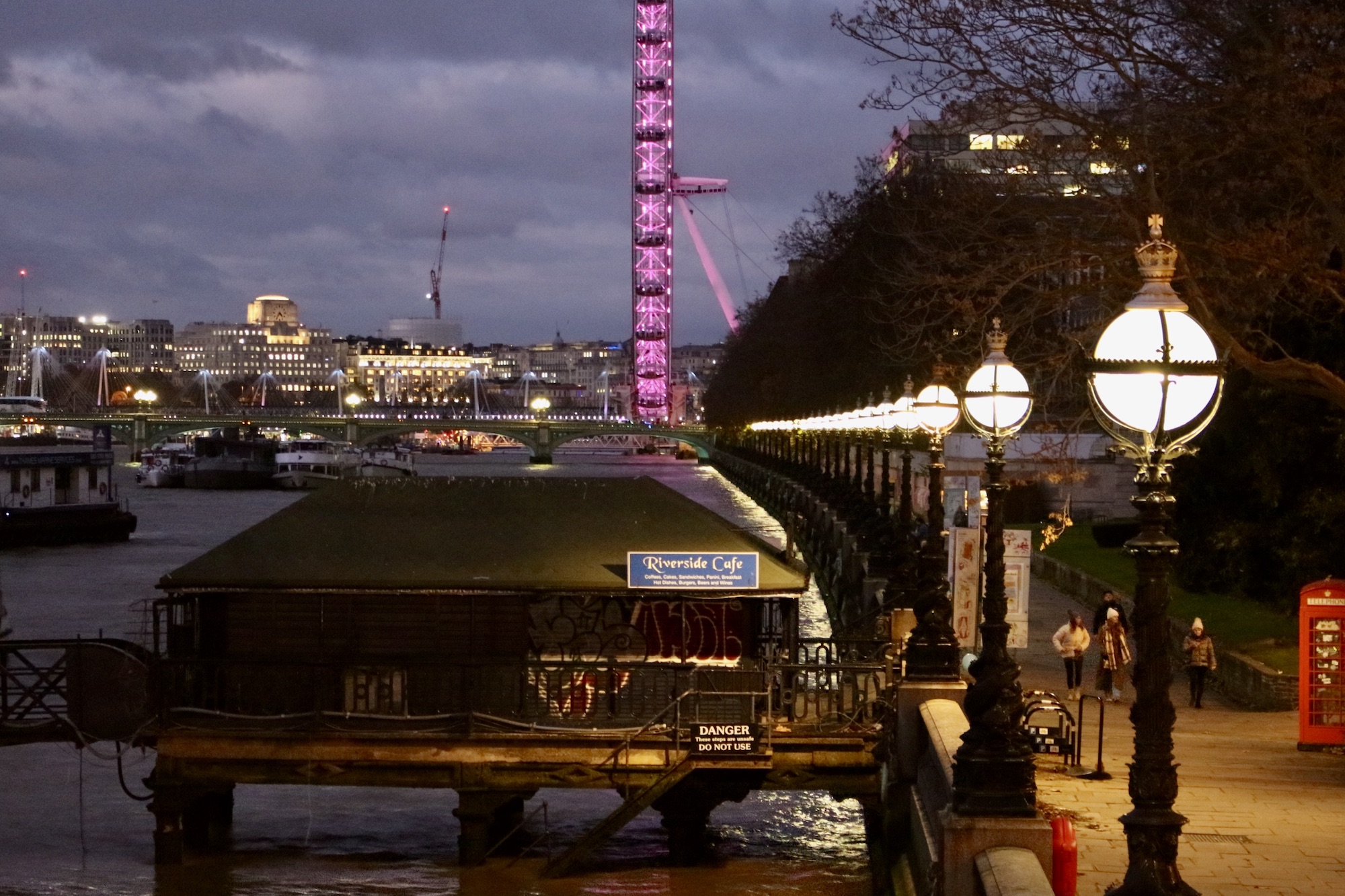 …along the central London Thames Embankments

So much a part of the scenery, yet often only featuring in the background of photos, the elegant lanterns lining the Thames deserve a closer look by day and by night. From the Chelsea Embankment, downstream along the Albert and Victoria Embankments to the Tower of London, here are some of the lamps that have caught my attention.

The most famous design, most widely seen, is the ‘dolphin’ lamp, designed by George Vulliamy, chief architect to the Metropolitan Board of Works from 1861-86, used for the lamps between Vauxhall and Blackfriars Bridges on the South Bank, and along the Victoria Embankment on the north side of the river.
However, beginning along the Chelsea Embankment are the lamps designed by Joseph Bazalgette, chief engineer to the Metropolitan Board of Works, one of the two designs chosen by architects, experts and the public after consultation. Paul Dobraszczyk explains the background to this in his article ‘The Thames Embankment Lamps’, with an illustration of the two designs eventually chosen. A elaborate third design, by Coalbrookdale, was considered less suitable for the multiple reproduction planned along the embankments, though one example exists close to Albert Bridge in Chelsea.
The majority of the lamps were manufactured in 1870 and set in place on the Victoria Embankment and part of the Albert Embankment but if you look closely, you will see that some later additions are dated 1964, and replicas were added to the rest of the Albert Embankment to commemorate the Queen’s Silver Jubilee in 1977.

There are other lamps along the central London Thames and among them, visitors to the Tower of London will notice the blue lamps both in front of the Tower, further upstream, and along the road leading up to Tower Bridge.

Yet it is the Vulliamy dolphin lamps that hold our attention. They were a bold statement made in a more confident age and even though that confidence has for the most part ebbed away, their design, with its cultural references and satisfying proportions, makes them worthy of their iconic status along the central London banks of the Thames.

‘Dolphin’ or ‘Sturgeon’ lamps…
There are different views on this.
All seem to agree that Vulliamy’s designs were inspired by statues of dolphins he saw at the Fontana de Nettuno in the Piazza del Popolo, and elsewhere in Rome but some argue that as the statues do not resemble dolphins as we know them, dolphins being mammals not fish, they are possibly modelled on sturgeon. However there does exist a dolphin fish, also known as maki maki or dorado, which might have possibly have been the orignal inspiration for the Italian sculptors. In any case, search “dolphins in European sculpture”, and you will come across many images of 17th-century scaled dolphins closely resembling those of Vulliamy’s lamps.

British Heritage is of the same mind writing that the design of lamps on one section of the Thames Embankment represents dolphins: “At intervals along the Albert Embankment river wall between Lambeth and Westminster Bridges, the thirty-six cast iron lamp standards are made of interlinked dolphins writhing around a fluted, wreathed column with globular lamp holder and crown finial on tall granite plinths, holding marine trophies.” They add that the “bases are inscribed alternately ‘1870 and VIC REG and also (faintly) Masefield & Co Founder, C. Vulliamy, archt.”

And for Paul Dobraszczyk, lecturer at the Bartlett School of Architecture, University College London, Vulliamy’s Thames-side lamps are simply known as “dolphin lamps”.

A final point worth noting is that scaled dolphins have also been widely represented in different forms on coats of arms. In 1909, Arthur Charles Fox-Davis writes: “The heraldic representations of the Dolphin are strangely dissimilar from the real creature, and also show amongst themselves a wide variety and latitude.”