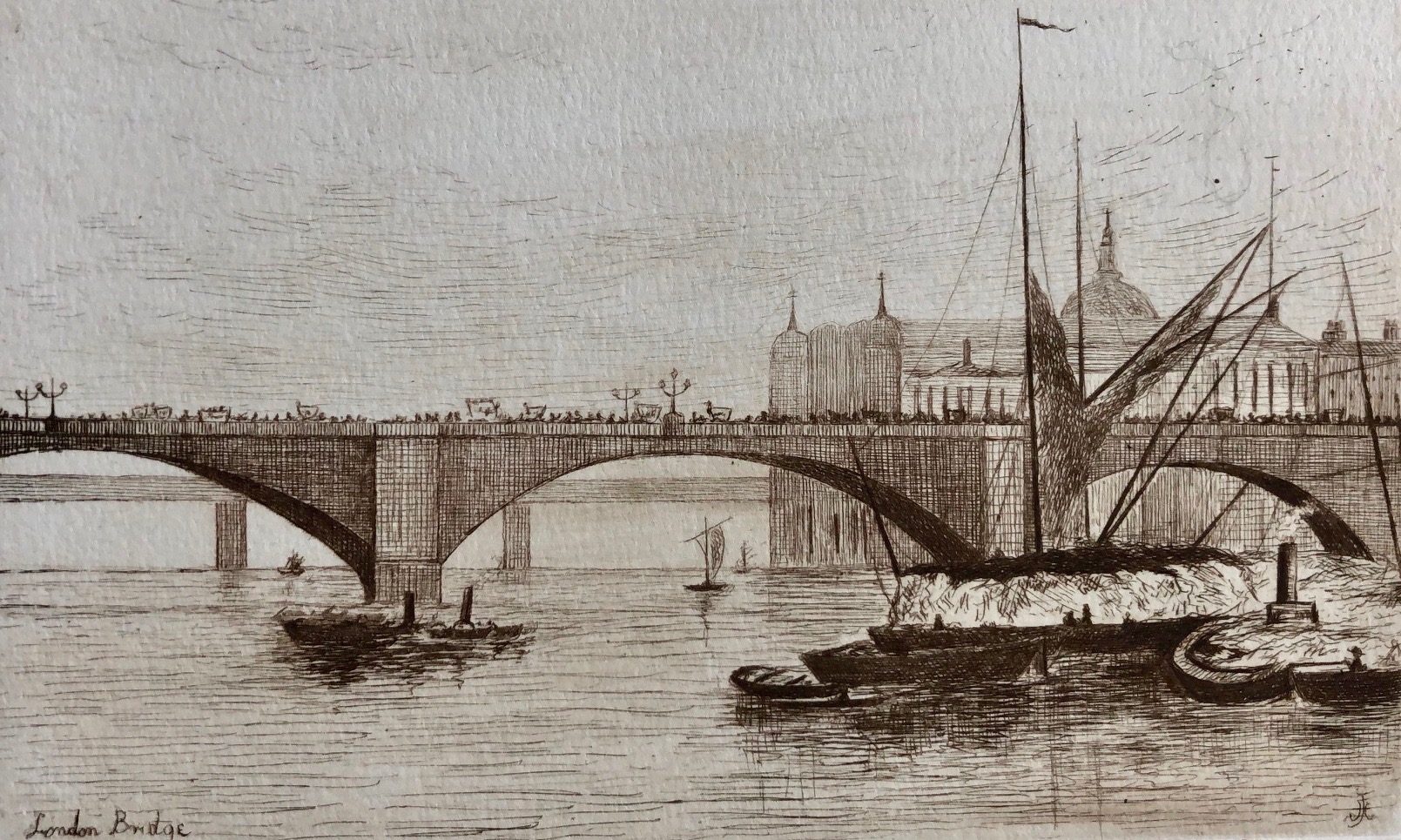 Etchings of London’s Bridges by J. H. Herring, 1884, together with recent photographs.

Returning to the subject of central London’s Thames’ bridges where in an earlier post I quoted from J. H. Herring’s book: Thames Bridges from London to Hampton Court, published in 1884, I am now sharing some of his etchings, along with roughly equivalent views from my photo archives.

From the earliest days, bridges have imposed difficulties on navigation. And the historic London Bridge, the city’s only Thames bridge for centuries was no exception. Sarah Morris writes in ‘Old London Bridge in the Sixteenth Century’ that its nineteen narrow arches effectively caused artificial rapids between the two sides of the bridge “that were highly dangerous to navigate {…] Sailing a boat between the pillars was called shooting the bridge”.
Though today’s navigational problems on the river are not as hazardous as then due to safety measures, there are still dangers and much to be learnt by professionals studying for official qualifications. In 2007 a national Boatmasters Licence was created by the Maritime & Coastguard Agency to replace the former Watermen and Lightermen’s Licence, and one addition to this for the Thames, is the Port of London Authority’s Local Knowledge Endorsement which applies to the river from Margaretness to Putney Bridge, and necessary for anyone holding a national Boatmasters Licence navigating in this area.
Someone with expert local knowledge is Waterman and Lighterman Eric Carpenter, who worked for fifty years on the Thames and surrounding waterways. Further on he kindly gives me insight into difficulties navigating some of the central London bridges. Also adding notes of their experience are Vic Clarke, who sailed up the Thames from Blyth on collier SS Hudson Firth, delivering coal to London power stations in the 1960s, and Wal Daly-Smith, whose life has been bound up with the Thames for both work and pleasure since boyhood.

Though he can’t recall exactly which bridges, Vic Clarke remembers “a couple of times being on the keel at low tide. It was dependant on where we berthed. I can remember, along with a couple of senior seaman lowering masts at some point. There were no electric winches on the “Firth” just old steam winches. These times were just noise and activity with the Bosun shouting orders above the steam Jennys. I realise now how we must have been limited to where we discharged our load due to low bridges, and that’s where the ‘flat-irons’ came in.” The masts and funnels of these specially designed colliers telescoped into the hull allowing them to pass under all the bridges to the power stations upstream.

Wal Daly-Smith says that for him, “passing through Blackfriars bridges on a near high tide with a strong wind can be challenging! It gets very choppy in that area.” Having looked down into the turbulent waters racing beneath, I can understand that.

Eric Carpenter who worked for Cory Waste Management at Charlton from 1984 until his retirement in 2008, explains that extra care is needed to navigate bridges positioned on bends in the river. Coming upstream, “the tide wants to flow in a straight line, so when it coms to a bend, it ‘sets’ into the bend and consequently takes the tow with it.”
Eric says “The first bridge that comes to mind is Waterloo Bridge. On the flood, the tide sets towards the north shore, so not too much of a problem because the arch is quite wide.” He adds that “the tide sets to the north shore of the Hungerford Railway Bridge as well.”

Eric explains that “the concern with Westminster Bridge is its small arches, so there it’s important to line correctly. Extra care is needed when towing craft with empty containers when the weather is windy.” Something he was only too aware of when towing Cory barges. So the sets, the direction towards which the current is flowing, have to be learned and “obviously on the ebb tide, they are in reverse”.

A parliamentary Select Committee on the Embankment of the Thames, dated June 1840, went into some detail over the various problems of navigation at the time. There are minuted reports of interviews which bring to life enterprises, such as the rebuilding of Parliament destroyed by fire in 1834 involving the construction of a cofferdam and its effect on the river; trade such as the importation of coal; all kinds of commerce; and a real glimpse into what working on the Thames was actually like.
There are details of problems with “the shoaly state of the river”; the effect of the removal of London Bridge “occasioning an earlier flood tide and a longer flood tide”; and constant complaints about the “noxious state of the mud” into which London’s waste flowed freely. This last problem was not to be addressed until “the great stink of 1858” made working in the Palace of Westminster, and elsewhere along the river, quite impossible. It was Sir Joseph Bazalgette who finally achieved the building of a sewer system for London in 1875, which has served the city well, only now being replaced by the Tideway ‘super sewer’ at present under construction.
Among the witnesses called in were: John May, Master of iron steam-boat, the Moonlight; James Covell, Master of the Woolwich steam-boat the Naiad; William Dennis, Waterman for over forty years; and William Gillet, Captain of an ‘iron boat’, called The Bachelor. When questioned, on the state of the river, Gillet replied:
“There is a great deal of inconvenience at low water time; the river is very shallow at places between Westminster and Waterloo Bridge.”
When asked on his opinion as to the construction of an embankment on each side of the river he said ” It would cause a great run of the tide; and it would cause more water in the river; and it would cause more race of the tide.” He added when questioned further, that dredging and deepening the river would make it more navigable, provided the dredged material was actually removed. When asked if his vessels had ‘received any injury’, he told the Committee that “They have very often got aground near Westminster Bridge; and we have been aground in some other parts.”
The collection of first-hand accounts in these reports, in the witnesses’ own words, recreate a bygone age, parts of which would, I imagine, still be familiar to those working on the river today.

To end: An interesting and engaging short interview with experienced Thames Lighterman Bob Harris, explaining in the second half of this piece, the difficulties of navigating Vauxhall Bridge. It was posted on Youtube by @LiquidHighway

Thanks to:
Eric Carpenter, Vic Clarke and Wal Daly-Smith for their help.