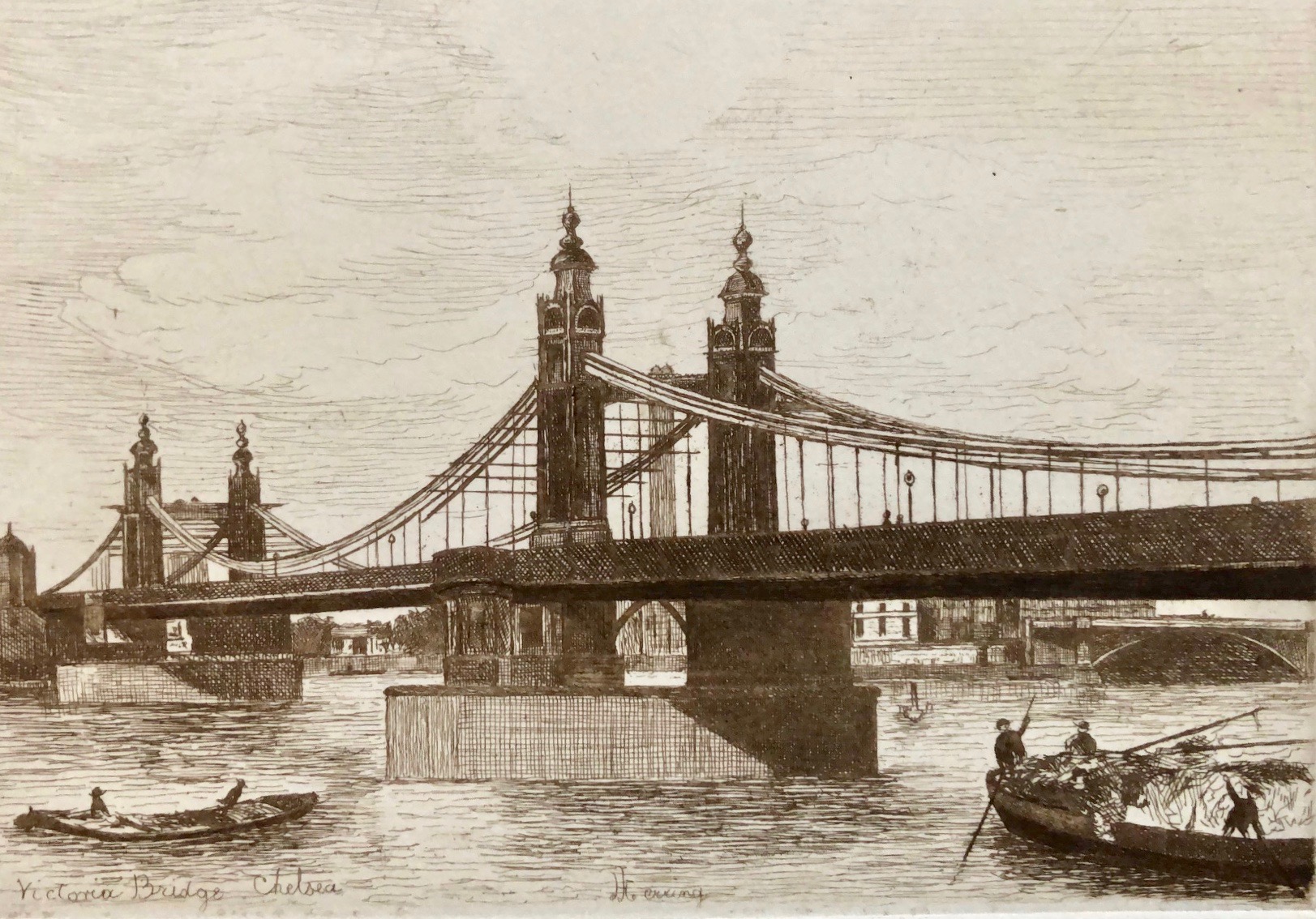 The bridge above, a toll bridge, was opened by Queen Victoria in 1858 and named after her. However, Zoe Craig writes that “its name was soon changed to Chelsea Bridge” suggesting that as it was “narrow and structurally unsound it might have been renamed to avoid any associations with the Queen should it collapse.”

As you may have noticed, not all London’s present Thames bridges are included in this collection as a number of them had not yet been built at the time Herring made his sketches. Tower Bridge, not opened until ten years later on June 30th, 1894 is the most famous of the *missing* bridges.

The start of the Oxford v. Cambridge Boat Race has traditionally been just upstream from Putney Bridge and ends just before Chiswick Bridge. However, the 2020 race was cancelled due to the Covid pandemic and this year took place on a rather less navigationally challenging course along the river Ouse in Cambridgeshire.
The race has always drawn big crowds and normally takes place each year around Easter time. On one memorable occasion reported in The Times, at the end of March 1912, “Both boats sank owing to the roughness of the water, Cambridge early in the race, off Harrod’s Wharf, while Oxford struggled as far as Chiswick Eyot”, where they emptied their boat and completed the course. However, much of Oxford’s annoyance, the umpire would not allow the result to stand and the race was rowed again two days later. The Oxford crew won by six lengths.

Waterman and Lighterman Eric Carpenter, who helped me with an earlier article on Herring’s drawings, remarks that “Hammersmith Bridge is quite low, and was a problem for tugs taking barges up to Brentford Dock, if they were late up on a spring tide”. He remembers when commercial traffic still travelled up that way “Many tugs on the Brentford run had open wheelhouses, or wheelhouses that could be dismantled” so were able to cope with the height limitations.

And now there’s a more serious problem at Hammersmith Bridge. At the time of writing all passages under the bridge have been cancelled apart from pre-arranged transits on Sundays, and even these are liable to cancellation should any of the movement alarms be sounding. According to Dorenda and Gordon of Hotel Boat Kailani, this has now been changed so that “boats are able to pass under the bridge on any day, giving at least 72 hours notice”.
There are difficulties too for road traffic. Much to the irritation and inconvenience of local residents, and others usually crossing the Thames there, the bridge has been closed to traffic for two years. A group called HammersmithBridgeSOS is campaigning “for the urgent reinstatement of the crossing”.

With thanks to the following for their help and for lending their photographs:
Benmeg for the Richmond Railway Bridge photo, 2015.
Waterman and Lighterman Eric Carpenter
Wal Daly-Smith, Director of Thames Ranger Marine Service. See his Views From the River
Artist, photographer and BBC Weather Watcher Ruth Wadey