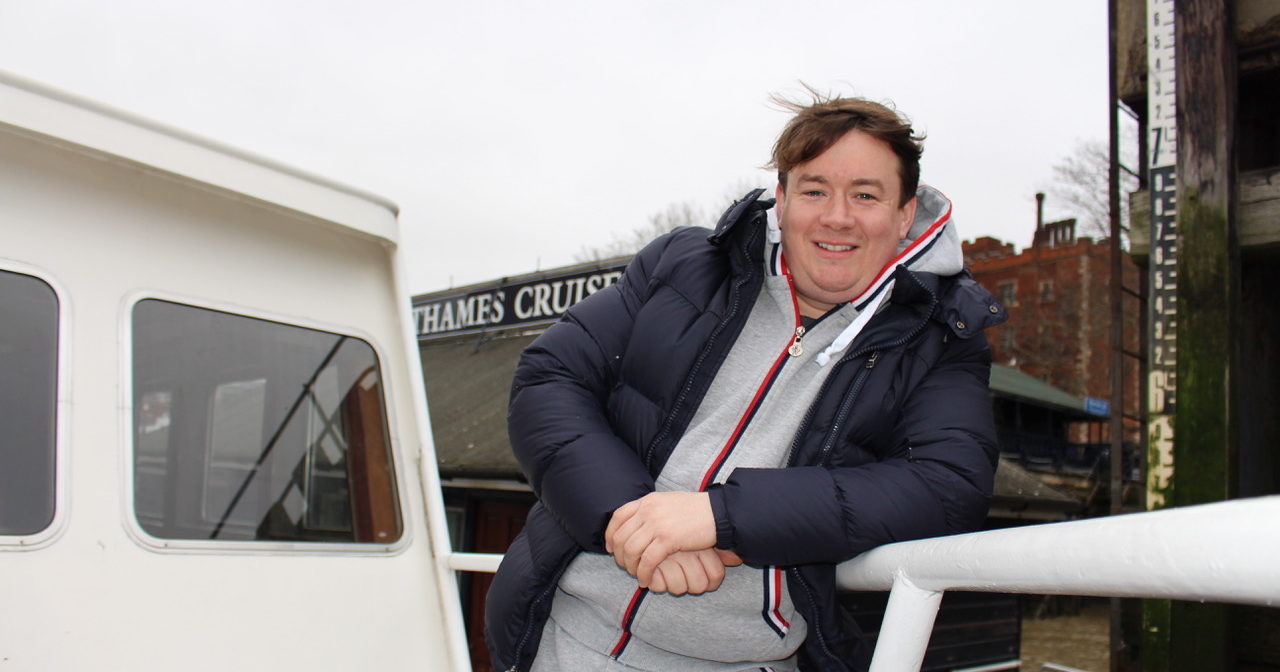 As we sit quietly on an inside deck of the softly rocking Thames Princess, moored at Lambeth Pier there are occasional soft splashes of water from the ripples of passing boats and the ebbing tide. Time to talk and reflect in a world away from the ceaseless road traffic on the embankment.

The Thames has been a vital thread flowing through Wal’s life from a young boy to the present day.  Growing up and going to the Riverside School close by, and exploring the muddy shores and wastelands around Rotherhithe in the early 90s was exciting for him and his friends, giving free range to their imagination.

If you’ve ever been on any of the Thames cruise boats where you usually get a running commentary delivered by one of the crew, you’ll probably have met a nipper proffering a hat as you disembark. This is how Wal began his work on the river.

His first experience was with City Cruises from their pier at Rotherhithe where aged twelve he met Mickey Reed, a Captain and lighterman who, as Wal showed real interest, passed on his knowledge of the river’s history and its ever changing character. “He was a kind of grandfather figure, a really good man.  He  took time and bothered with me, called me Blue”.  Working at weekends, Wal was allowed to keep the coins that he picked up from the hat, earning as much as £40 or £50.

Though his employment after school took him away from his cherished river for a while he kept in his mind, the words of a plaque that he’d seen in the Barry Albin-Dyer Memorial Garden in Southwark.: “Dream it, Believe it, Achieve it”.  Whenever he could, he chatted to and learnt from older and experienced captains along the river.  His chance of a regular job on the Thames came in 2017 when Ken Dwan and William Ludgrove of Thames Cruises showed confidence in his abilities and employed him as 1st Mate on their cruise ships.

Wal is also employed as a skipper on the Tideway project at Blackfriars, responsible for crews working on maintenance and safely checks. And, with endorsements and licences for the sailing of craft up to 24 metres, he has been ‘adopted’ by the Waterman’s Hall and is now studying for his Boatmaster’s licence. Once achieved he will earn his fourth stripe and become a Captain licenced to pilot larger, passenger-carrying boats.

Hearing a sudden low grumbling and rushing of water as a Thames Clipper slices by, he looks up. “Know someone?”, I ask.  “No, not on that one but,” he adds, “I do know a lot of those working on the river. It’s like having another family, not tied by blood but by our shared relationship with the Thames.” There’s a common understanding of its splendours and its dangers and respect for the power of the tides, which can make passing under certain bridges a challenge. “People working in the City are often hardly aware of the Thames, taking it for granted: it’s just there. But to have a job on the river which I love, is carrying on a tradition that goes back hundreds of years.  And this makes me feel a part of the sacred life on the river. I’m passionate about the Thames and I’d be really happy to see my kids following on after me.”