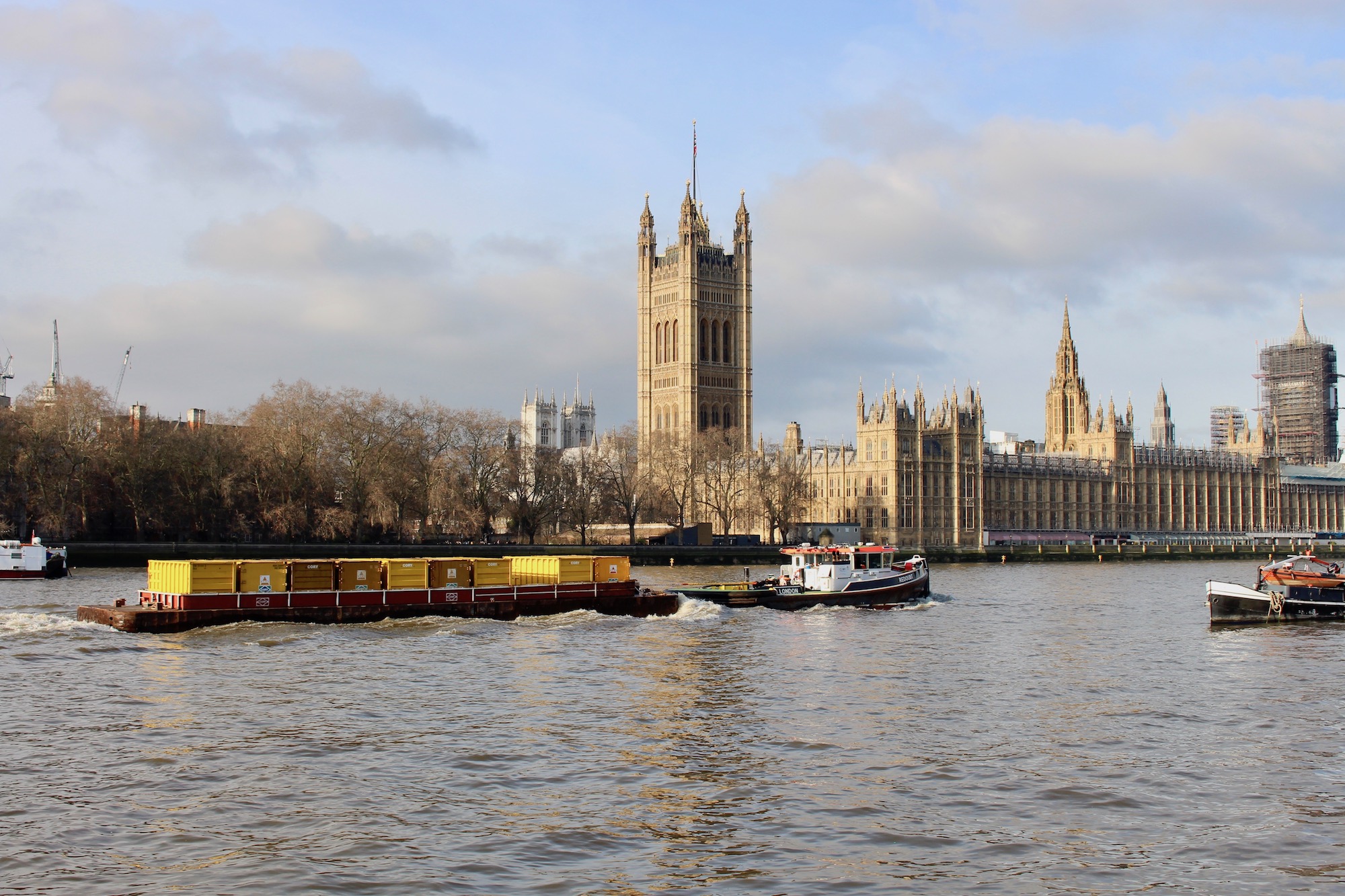 Gone are the boom days of the early 1960s when the section of the tidal Thames upstream from Tower Bridge to Teddington lock used to be crowded with boats delivering all kinds of cargo. Vic Clarke remembers “The dry cargo tramp steamers tied up daily had to be seen to be believed, all unloaded and goods moved by barge to the dozens of warehouses along the Thames. Tea was a big import and the number of colliers with daily coal for the power stations was massive.” Added to this, Waterman and Lighterman, Eric Carpenter has kindly given me a long list of the wharves and the goods unloaded there including: “chilled produce such as cheese and butter delivered to Hibernian Wharf next to London Bridge and to the Nine Elms cold store; assorted canned goods to Millroy and Grosvenor Road Wharves, where sacks of beans were unloaded for transportation to the Heinz factory at Uxbridge; to the candle manufacturer at Price’s Wharf; cement from Cement Manufacturers at Northfleet and petrol from Thames Haven refineries to Fulham Wharves; and many, many more.” So the river was very busy then, and as Vic says, “the barges went everywhere, like ants on water working continuously as cargo ships had to be unloaded as quickly as possible.” The colliers that he worked on had a twenty-four hour turn around and there were always more waiting to discharge.

After this boom in trade, the arrival of container ships in the latter part of the 60s meant that the Pool of London, lacking the dock or riverside space to cope with larger ships and their cargo, became largely redundant. River traffic from there declined and trade moved eastward to Tilbury, which at present is undergoing expansion, and also in 2013, to the vast London Gateway deep sea container terminal, by the Thames in Essex.

A far cry from the massive sizes and quantities involved with Tilbury and London Gateway, and the earlier cargoes mentioned by Eric Carpenter and Vic Clarke, here follows a personal look at cargo boats, or cargoes of all sizes under tow, spotted on my walks along the central London tidal Thames over the last few years. Many of them have been concerned with the major construction sites along the river, including the Tideway super sewer for London; building works in and around the old Battersea power station; and more recently the extension of Craven Cottage, Fulham Football Club’s ground.

Now under new ownership POLLA ROSE was spotted by Thames Waterman and Lighterman Ben of Liquid Highway, departing the inner berth at Tilbury Grain terminal last week. He pointed out that she was carrying “Thirty-six lorry loads in one trip”, relieving London’s roads of much traffic, adding “Let’s get the river busy again and see more commercial use.”

Ed Livett kindly lent me these two pictures, among many that they have in their collection marking significant events in London. And if you look at their site here, you will discover the wide range of their towage services.

Lastly, ending where I began with Cory tugs and their tows, there is one sight, the second of the two photos below, that’s particularly poignant during this time of Covid: the tribute to the NHS pulled along the river past St. Thomas’ Hospital.