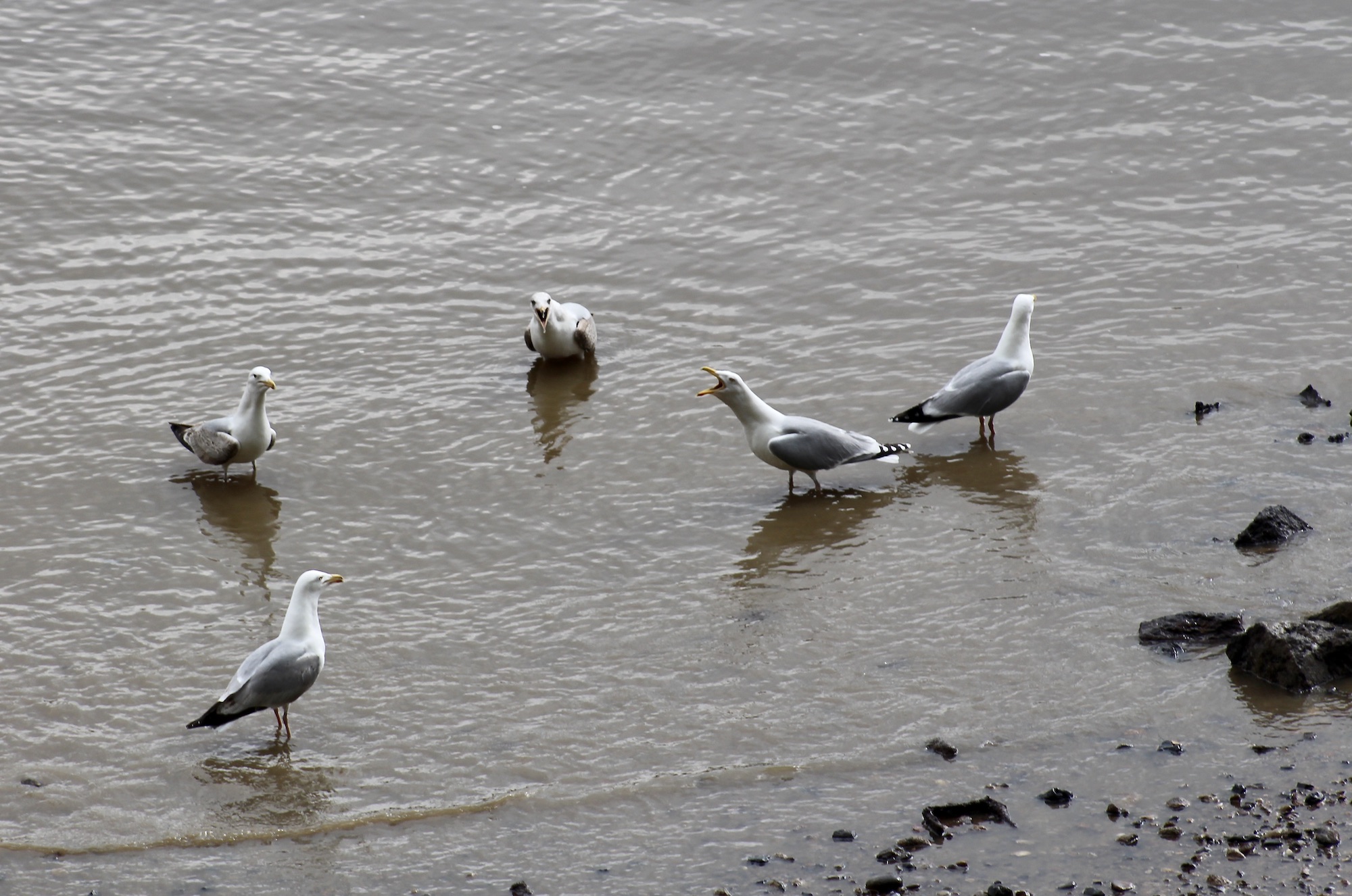 … watching herring gulls on the foreshore

Daily walks in Victoria Tower Gardens by the river Thames have often included a low-tide show on the foreshore by resident herring gulls, always interesting and often amusing to watch, and a welcome distraction from the follies taking place in a Neo-Gothic landmark close by.

Gulls are bight intelligent birds, exploiting any easy feeding opportunities they come across, which is why they’ve become lightening-strike chip and ice cream thieves in some coastal towns, passing on their knowledge to the next generation. We have hand fed three of them along the embankment wall, on and off during the past year and they clearly hadn’t received instructions from their parents. They were hesitant and gentle, and it took time to build up trust. At one stage, the gull we nicknamed Bonzo, used to appear expectantly on the wall as soon it caught sight of us. We were always careful to give only a few small pieces of bread as the Thames, you will see below, now has a good supply of natural food. However, the gull in the image immediately below, having picked a yew twig out of the water, seems to be simply playing with it.

But there’s real food on the foreshore. For those of you who don’t know this, the Thames was declared “biologically dead’ by the Natural History Museum in 1957 and now, though still at risk from overflow sewage after storms, as has been the case recently, it is teeming with life. Herring gulls can be seen picking up and eating crabs and all kinds of shellfish, dropping the latter onto hard ground in order to crack them open, a skill passed on from one generation to the next. They catch some fish, and we’ve even seen one catching but unsurprisingly, failing to eat an eel. However, before young gulls attempt to practice what they’re gradually learning, they still want to be fed, pursuing their parents and squeaking a lot.

The Port of London Authority has a Nature guide here and London’s new 25 km ‘Super Sewer’ Tideway, on time for completion in 2025, should intercept any spillage and “clean up our river for the good of the city, its wildlife and everyone.” Hopefully it will. And hopefully, bearing in mind recent shocking news, their example will be followed by others, if not voluntarily, then by law…

Notes on Herring Gulls
Larus argentatus
Their plumage takes four years to reach its adult state.
In the first year the birds are mottled brown all over; in the second they are mottled brown with some grey on the back; in the third they have more grey on the back and more white on the head and breast.
In winter their plumage changes and they have dark streaks on their heads and necks.
Juvenile birds have mostly black beaks and mature birds have a red spot on the lower part of their bill, which chicks peck at when they want to be fed. According to research by naturalist Dr. Niko Tinbergen, “chicks will peck at any long yellow thing with a red spot in order to get food,” so that they are born with an instinctive preference for their parents’ bills.
Their legs are flesh coloured at any age.
Their average lifespan is 12 years, though some have been known to live for as long as 30 years.

Conservation status of Herring Gulls in the UK
They are red-listed as a ‘threatened species’, as there has been a strong decline in both the breeding and wintering populations. (RSPB Handbook of British Birds, 2021)
See also: Birds of Conservation