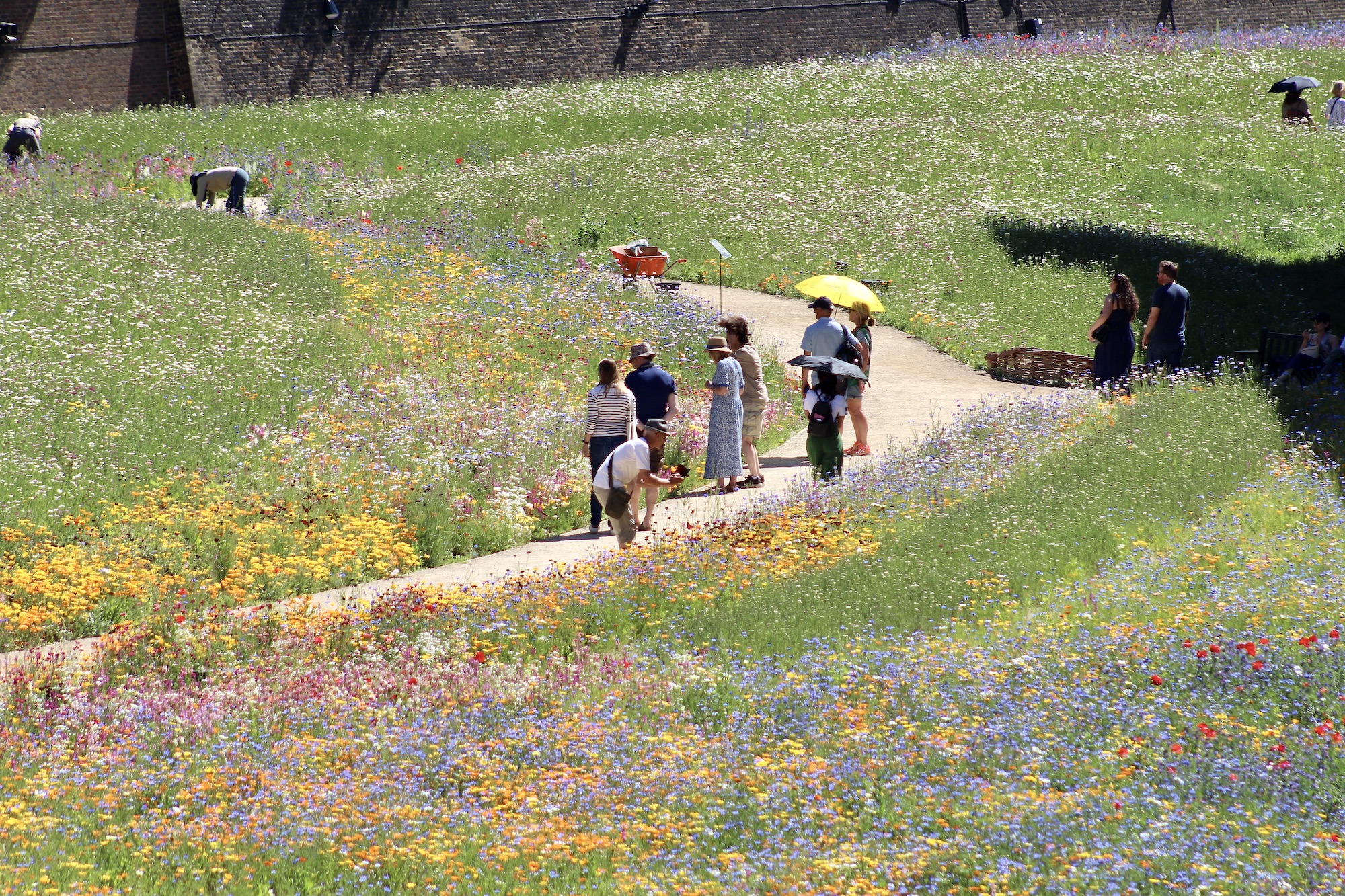 The Tower of London’s tribute to HM The Queen

There have been numerous events and celebrations in 2022 to mark the Queen’s Platinum Jubilee but this has to be one of my favourites: Superbloom in the Tower of London’s moat. Twenty million seeds from twenty-nine flower species were planted earlier in the year to create a “floral tribute to Her Majesty”. And now the display is spectacular and will be at its best until at least September. Rhiannon Goddard, in charge of the Superbloom project, tweeted that from July 1st the Superbloom would be open until late so visitors can see the flowers illuminated.

The flowers are set to bloom in “three vibrant and colourful waves”. In June the dominant colour will be the orange and yellow of Pot Marigolds; in July, the moat will be carpeted in blues and purples of cornflowers, punctuated by red poppies; and from August until the end of September, Dyer’s Tickseed, among other flowers will turn the moat into “a sea of golden blooms”.

The display doesn’t quite occupy the whole of the moat. A section on the south side facing the Thames has the Tower’s pet cemetery and a stretch of water below St. Thomas’s Tower leading to Traitors’ Gate, which shows the intimidating view faced by prisoners as they arrived at the Tower.

The moat was drained for health reasons in 1845 by order of the Duke of Wellington, Constable of the Tower but it was to be completely filled once again, this time by an act of nature: the severe flooding that engulfed large parts of low-lying London on January 7, 1928.

A short history of the Moat sourced from Historic Royal Palaces
The first moat built by William the Conqueror, defending what became known as the White Tower, was a “deep ditch on its north and west sides only”. It was expanded by Edward I in the 127os and eventually filled with water from the Thames. “It was so long-lasting and effective that its basic shape survives to this day.” In 1292 Edward ordered the use of the moat as a fish farm beginning with “a large stock of young pike.” So began the use of the moat as a source of food over several centuries.

However, “during 1843 and 1845, an outbreak of a lethal infection was caused by poor water supply at the Tower. The muddy moat, reeking of “putrid animal and excrementitious matter” when the tide was out was seen as a possible culprit. This prompted the Duke of Wellington, Constable of the Tower of London at the time, to have “the moat drained and turned into a defensive dry ditch.” And being dry it then became available for different uses, practical, military, commemorative, and celebratory.

“The sunny south side was used for growing vegetables as early as the 1890s”, while livestock grazing in the rest of the moat kept the grass trimmed.” And as many of you will know, the moat was turned into an allotment as part of the government’s ‘Dig for Victory’ campaign during the Second World War.

In 1897 soldiers taking part in military parades to celebrate Queen Victoria’s Diamond Jubilee camped out in the moat. During the First World War the moat was used for training recruits before they were sent to the Front. During the Second World War, two out of the twelve executions of German spies, took place in the moat.

Two commemorations marking both the beginning and ending of the First World War took place in the moat. In 2014, the 888,246 hand made ceramic poppies, representing all British and Commonwealth fatalities, made up the art installation “Blood Swept Lands and Seas of Red”, and in November 2018 “Beyond the Deepening Shadow” saw 10,00 candles lit nightly in a ceremony of Remembrance.

But the moat has seen celebrations too. In 1977 the Queen’s Silver Jubilee was marked in the West Tower Moat with a display of 470 thousand begonia flowers, a gift from Belgium. And this year, 2022, the magnificent Superbloom display celebrates HM the Queen’s Platinum Jubilee.
For full details and interesting archive pictures, see the Historic Royal Palaces site here.