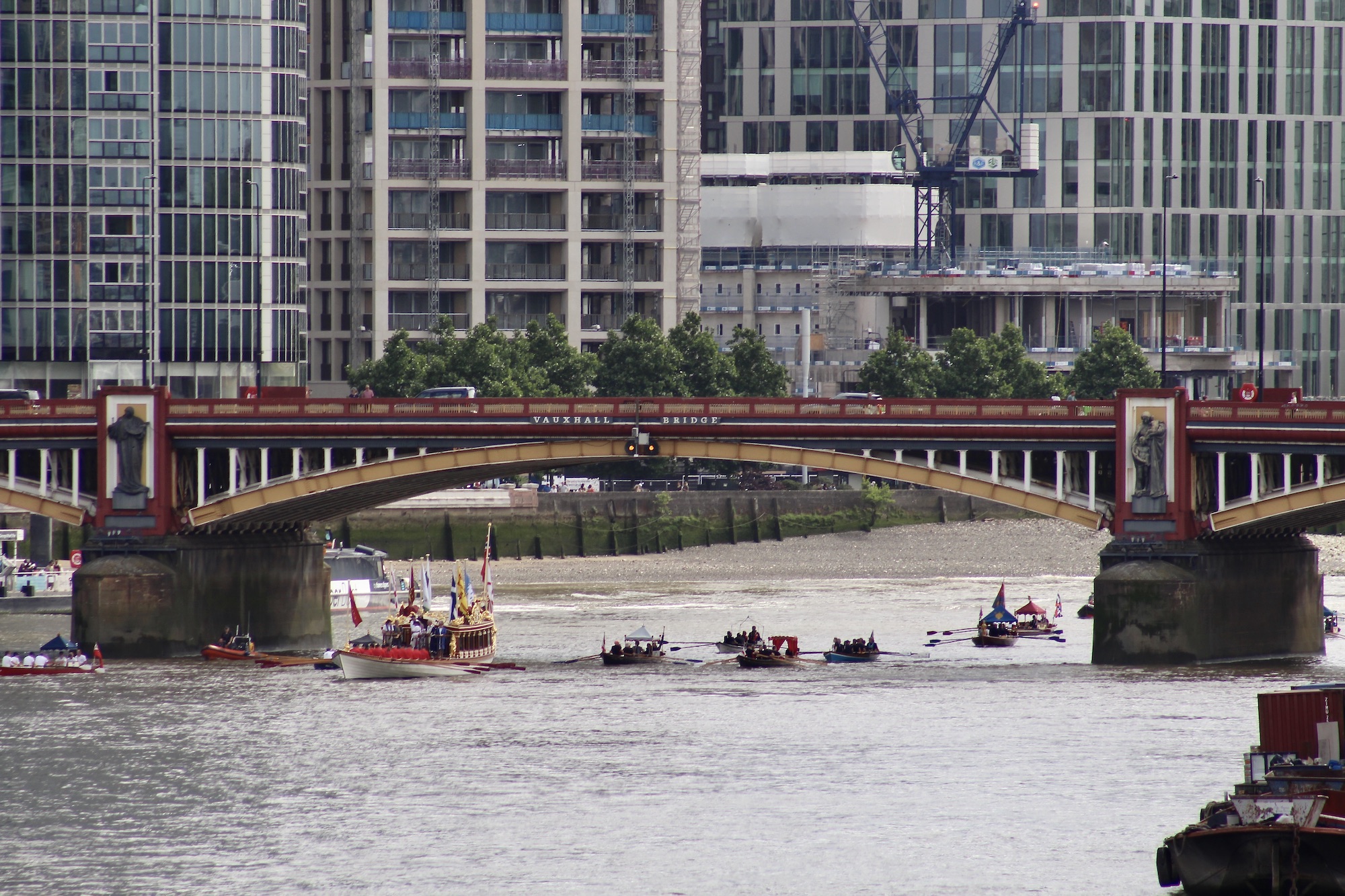 All seemed quiet on the river after a couple of sight-seeing boats passed beneath Lambeth Bridge on their way upstream. Then a flash of gold and a scene reminiscent of Canaletto’s eighteenth century ‘The Thames on Lord Mayor’s Day’ slowly materialised as a flotilla of canopied cutters under oar made their way downstream from Vauxhall Bridge.

Called the ‘The Tudor Pull’ this ceremonial row, dating only from 1987 but steeped in Thames tradition and London history, is said to have been the outcome of a challenge by Prince Philip, quoted by the Thames Festival Trust, who asked the Royal Watermen, often accompanying him on the Thames, “Can you chaps actually row?” They could and certainly still can, “many of them being international oarsmen.” The Tudor Pull, conceived by the Thames Traditional Rowing Association, first took place between Hampton Court and Greenwich but now ends at the Tower of London after a distance of about twenty-five miles.
The star of the Tudor Pull is of course the Queen’s Rowbarge Gloriana.

Inspired by images of past pageants along the central London Thames, a group of people wishing to include and highlight the river as part of the celebrations for the Queen’s Diamond Jubilee in 2o12, came together. Their discussions led to Lord Sterling’s “initiative to build an elegant rowbarge, large enough to have a visual impact on the Thames and more significantly to be a lasting legacy of the Jubilee.” Lord Sterling generously underwrote more than £1 million of her cost and over-saw and co-ordinated the four-year enterprise from the first designs to the construction. Enthusiasm combined with time pressure resulted in Gloriana being built in just five months.

And at the heart of the ceremony is the Stela, a slice through a medieval water pipe, made as they were in those days of hollowed out elm trunks, carried from Hampton Court, where it is usually kept, and delivered to the Governor of the Tower of London.

The timber for the base of the pipe came from the piling of the original Richmond Lock and Weir and was donated by the Port of London Authority. The model of the Watermen’s wherry at the centre of the pipe represents a typical boat available for hire in the past, when for many the Thames was the fastest way to travel in London, or to cross to the other side of the river.

The Thames Traditional Rowing Association explains how the event “supports the apprentices system of the trade of Thames Watermen and Lightermen and draws attention to London’s great under used asset ~ The River Thames.” Using the river for the transfer of all kinds of freight is not only a practical and speedier option than using the road network, it’s also better for the environment.
In 2015 the Livett’s Group launched a “Better By Water” campaign to highlight the commercial advantages of using the Thames. However, Covid disrupted river traffic, apart from the essential Cory waste removal barges and transport of components for the Tideway and other construction sites, and it completely halted the businesses of the pleasure, sightseeing and party boat companies. Happily these seem to be thriving now. Yet there is more to be done to make full use of the river. Earlier this year a TFI report stated that the Thames has untapped potential for handling light freight

Further information
The Building of Gloriana
The Queen’s Rowbarge Gloriana
Discover the types of boats taking part: The Thames Traditional Rowing Association
The Company of Watermen & Lightermen of the River Thames, account, June 29, 2019: The Tudor Pull
The Thames Festival Trust
The Tudor Pull Port of London Authority
Note
Thanks to @speediemeadie for permission to post the image of Lord Sterling with the Stela.
If you would like a copy of any of the other photographs, please let me know via Twitter and I’d be happy to send them on.