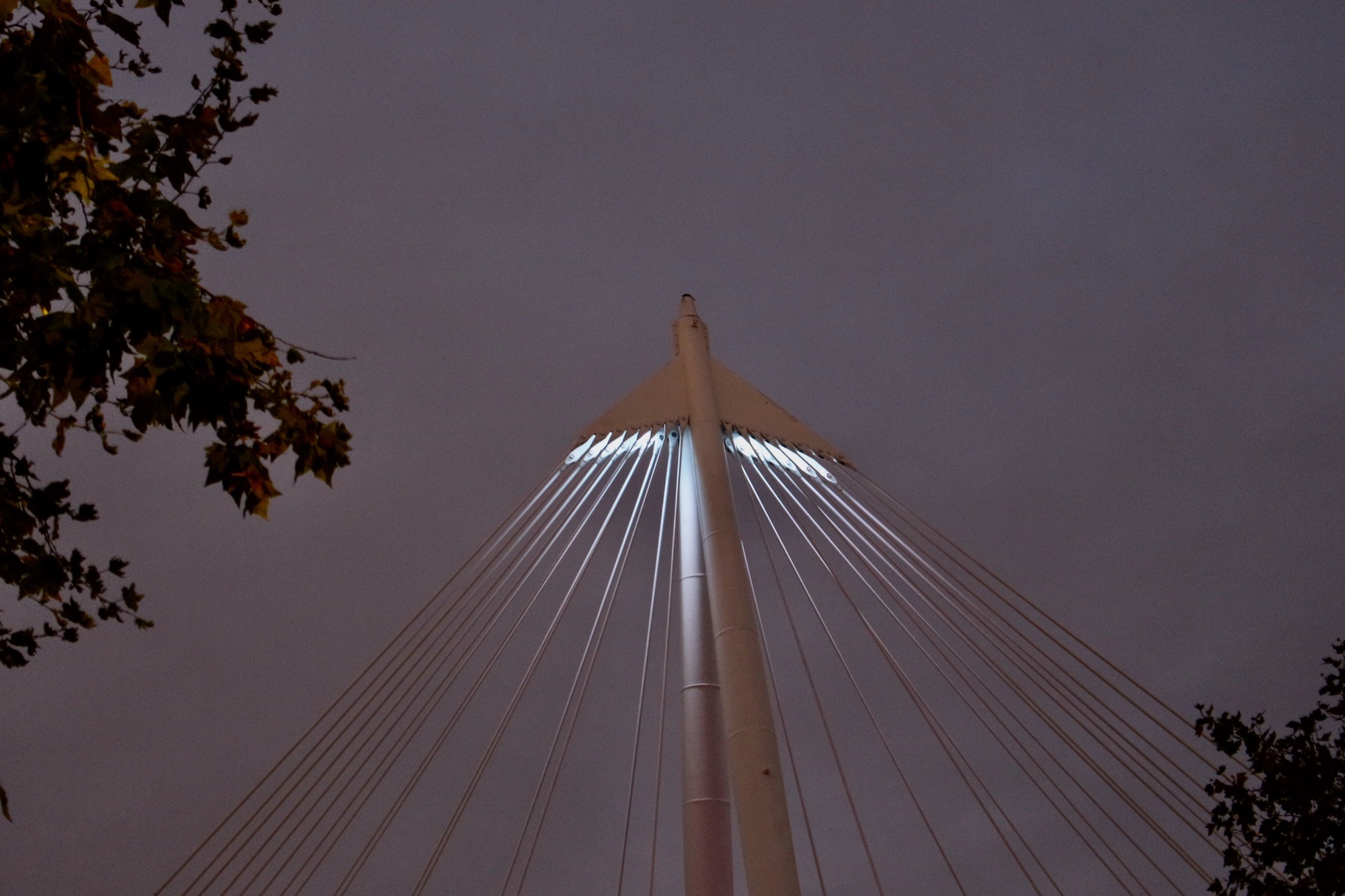 There’s something magical about cities at night and London is no exception, particularly with the recently created Illuminated River art project lighting nine central London Thames bridges from below. However lighting of some kind for the roadways above has been in place for the safety of pedestrians and traffic almost since the bridges were first built, and a number of the more decorative designs between Tower and Putney Bridges are well worth a closer look.

Tower Bridge
The bright light blue of the lamps leading up to the central section of the bridge are part of the existing blue and white colour scheme designed for the steel hangers, suspension chains balustrades, and the bascules of the bridge itself. But there is, if you’re on the look-out for it, one rather strangely shaped lamp, in fact a chimney connected to a coal fire once used in what was a guard room below. It fell out of use after the introduction of the Clean Air Act in 1956, which prohibited the emission of “dark smoke”, so banning the use of coal, apart from smokeless fuel, from any chimney on any building.

The Millennium Bridge
Nicknamed to begin with as the “Wobbly Bridge”, due to a design fault by architects Foster & Partners, now rectified, the walkway of this slender and elegant footbridge is lit from the side. Its incorporation into the Illuminated River Project saw artist Leo Villareal develop Foster’s orignal idea of a “blade of light” into pulses of light along the side of the bridge, echoing the movements of people crossing, creating silhouettes enhancing the structure like a moving picture with a constant stream of images.

Westminster Bridge
Visitors to London crossing the bridge naturally focus on the Palace of Westminster, the tall Elizabeth Tower and clock, known more widely as Big Ben, though that, as you might know, is actually the sonorous bell which has marked so many national events. But stop for a moment and consider the lanterns. Created in the Tudor-Gothic style by Sir Charles Barry, to match that of the Houses of Parliament, they are strikingly elegant, subtly changing colour along with the quality of daylight. Look closely and you’ll notice a tribute to Queen Victoria and Prince Albert, a V&A in the centre as part of the design.

Lambeth Bridge
1932 saw the opening of Lambeth Bridge by George V and Queen Mary, and the style of its street lighting reflects the Art Deco fashion of the day.

Albert Bridge
The Victorian lamps light up the roadway at night, and the whole bridge is illuminated by thousands of LED bulbs, delighting all those who walk, drive, or sail past.

Battersea Bridge
In 1992, English Heritage approved the restoration of the bridge to its original appearance. Removed during WW2 the lamps had been replaced with replicas, and exterior lighting experts DW Windsor undertook the refurbishment of the lanterns and columns “which were broken and had been damaged from years of use.”

Putney Bridge
Taken by Wal Daly-Smith on his way under Putney Bridge, this photo shows a fleeting glimpse of two of the fine lamps that light the roadway above. These ornate, Victorian cast-iron lamp posts and lanterns have been carefully looked after by Wandsworth Borough Council and restored by specialists J.W. Lighting.

Of course there is attractive lighting on Thames Bridges further upstream such that as on Hammersmith, Kew, and Richmond Bridges but hopefully that will be for another time…