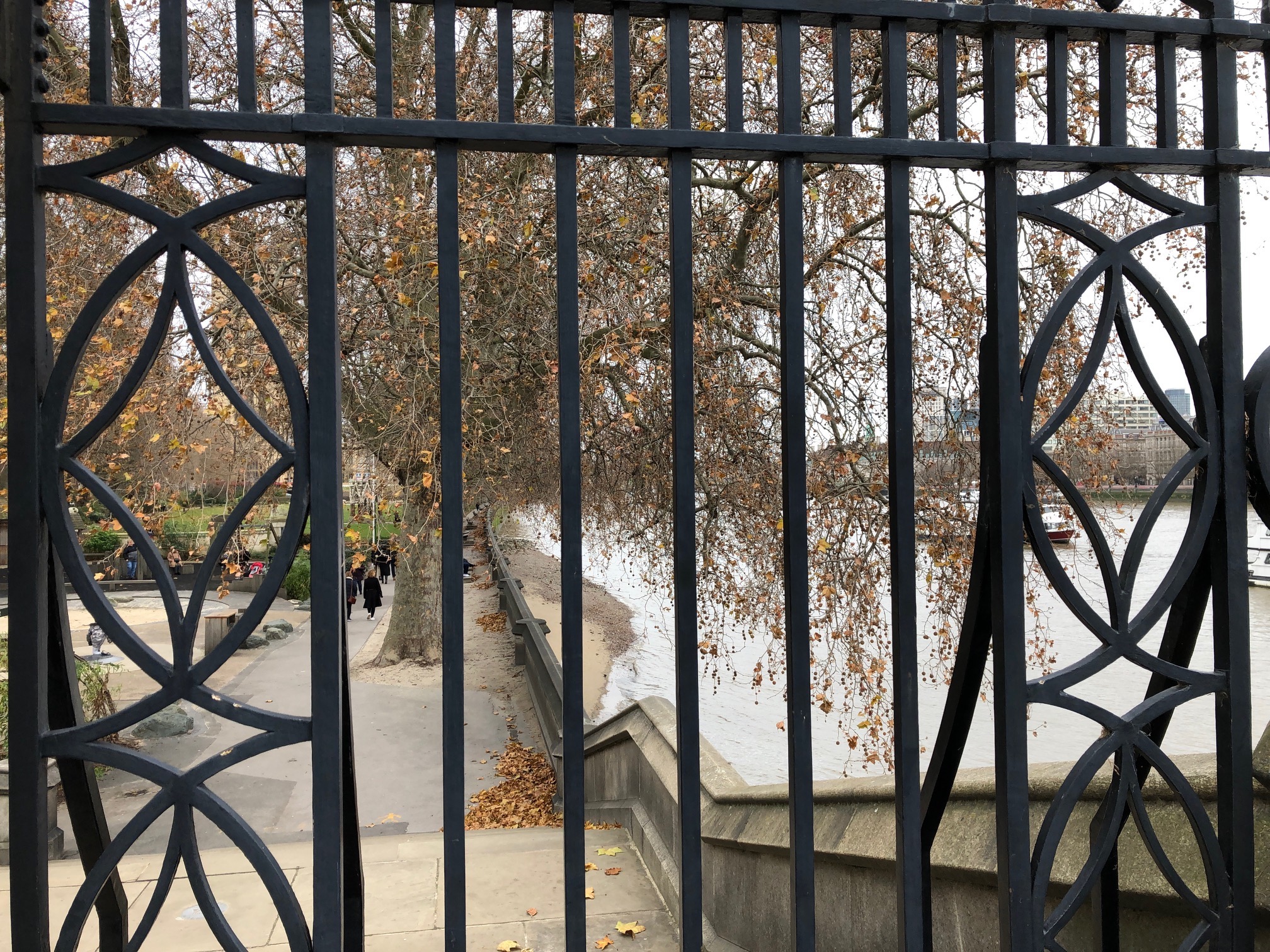 Some of my favourite pictures…

Cory tugs are a familiar sight along the tidal Thames. As well as performing a vital daily waste-removing service for London by barge, their tugs brighten up the river. As this one sailed upstream under Lambeth Bridge, with leap of the imagination, it could have been seen as a sign of hope that, with the roll out of the first doses of Covid-19 vaccinations at the end of 2020, 2021 would be a better year. It wasn’t really but without the vaccine and advances in treatment of Covid, it might have been so much worse.

Lockdowns and restrictions of various kinds caused many of the central London Thames boat companies to suffer serious financial losses. However, though at times there was little leisure traffic, workboats were often out and about. ALFIE, owned by marine specialists Livett’s was always good to watch at work.

Watching infinite patterns on the water’s surface made by boats, birds, winds, or tidal flow, was a soothing way to escape from the world’s problems.

As well as being one of London’s most important teaching hospitals, St. Thomas’ Hospital has been at the forefront of the fight against Covid. Many Londoners have been there for their vaccinations.

Just one of the brightly-coloured ring-necked parakeets that have made London’s parks and gardens their home. Their loud squawks and at times, softer budgerigar sounding trills, are very distinctive. And in winter, without the camouflage protection of green-leaved trees, they’re easy to see and to photograph.

The Port of London Authority survey vessels, when they appeared on Lambeth Reach, were interesting to watch. See details of their fleet here. Sometimes they pass by and at other times criss-cross the river surveying the river bed in great detail.

London Fire Brigade vessel FIRE DART is one of two fire boats moored at Lambeth. As well as attending to emergencies, they often pass by on training or official duties where, using their fire hoses in salute, they take part in a number of ceremonies.

LONDINIUM III is a London Port Health Authority vessel that has passed by a number of times.

Having taken many photographs over the years, the soft green of the Victoria Tower Gardens’ plane tree leaves unfurling in the early summer has always been a favourite time to record.

A crew from Tower RNLI Station heading downstream at speed. Tower is one of the four RNLI Stations set up along the tidal Thames in 2002 after the Inquiry into the MARCHIONESS disaster of 1989. See their *Birthday* film here.

Sturdy ESSEX is a pusher tug belonging to Walsh.

The Victoria Tower Gardens’ foreshore is always busy at low tide with black-headed gulls in the winter, crows, pigeons, and various types of gull finding plenty to eat on the tideline. A black-backed was a rarer visitor. For different types of gull on the lower reaches of the Thames see here.

Pictures can be quite dramatic against a dark sky. It’s a question of luck to catch an image at the right moment.

Sleek-looking ALERT is one of GPS Marine Contractors’ vessels and is a high speed survey launch. Discover more here.

Watching mudlarkers inspecting and searching sections of the foreshore, I’m reminded of Claire Trévien’s collection of poems: Low Tide Lottery, for that is essentially what mudlarking is. A lottery. Relics from London’s past can be discovered from stone age tools, implements, remains of buildings and all kinds of fragments through to coins and religious offerings. The Museum of London has a large collection of finds from what is described as “London’s longest archaeological site”. However, mudlarking along the Thames foreshore is for licence holders only, and a Port of London permit is needed.

Here was another chance to catch a sunlit building against a dark sky. This time the Palace of Westminster.

A nice jumble of boats that brings to mind a French artist friend, Pierre Lorthioir (1937-2010), and his paintings of the boatyards at Le Guilvinec in Finistère.

Just one of the nine bridges over the central London Thames lit up by the inspiring and magical Illuminated River art project. And, as well as using its image as a header on my Twitter site, it’s the bridge I spend a lot of time on.

DRIFTWOOD III is one of the Port of London Authority’s marine services vessels. She has all kinds of machinery and gadgets for the various functions she performs to keep the Thames safe and clear of debris.

Those who follow my Twitter accounts might have noticed a number of pictures of Bonzo the seagull, who would often appear on the wall by our usual bench in Victoria Tower Gardens. Unlike the dreaded dive-bombing, chip-pinching gulls in some seaside towns, Bonzo is quite shy, though not averse to taking a small crust or two from a proffered hand, otherwise quite comfortable resting close by.

The reddish pink colour of the National Covid Memorial wall’s thousand and thousands of painted hearts, runs as a leitmotive through several of these pictures. A line of mourning. It’s been a tough, tough year for so many…

…a tough year but there are encouraging signs with improvements in treatment and the apparently less severe strain of Covid, Omicron. Could the emergence of the beautifully restored Elizabeth Tower perhaps be a symbol of hope?