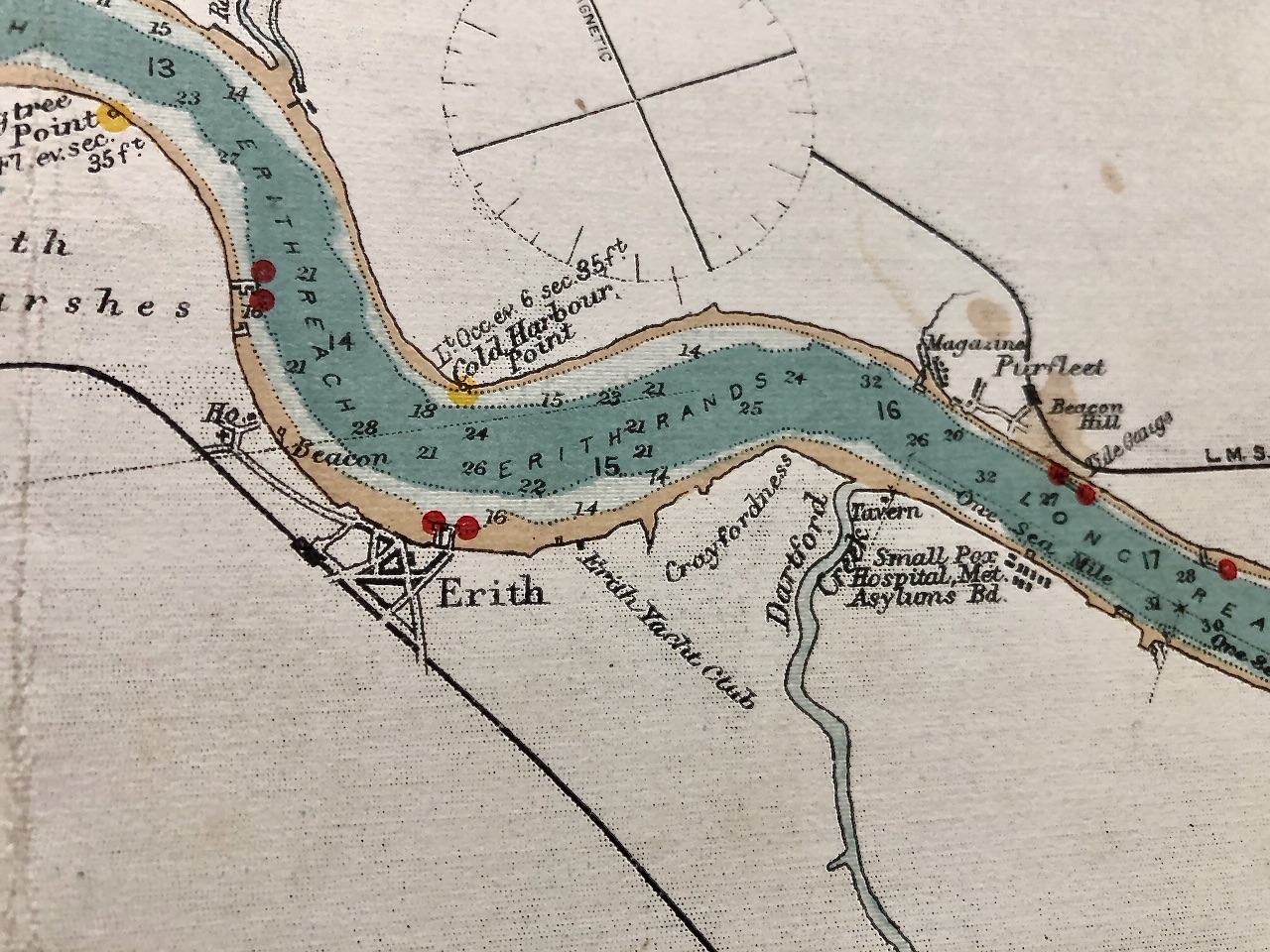 Extracts from London to the Nore, painted and described by W.L. and Mrs Wyllie

By 1905 when the book of their journey from Westminster to the Nore was published Marion, Mrs Wyllie, explains how Erith, the once quiet village “in the midst of green fields and gardens” had been transformed, and that “No-one in the present day would call Erith pretty or rural.” She goes on to explain why:
“It is a place of gun factories, engineering works, and coal-wharfs, where cranes, derricks, and other engines of every shape and kind scoop the coal from the dusty holds of the many screw steamers.” The yachts that used to moor there have moved elsewhere and she notes the detritus that now takes up the shore: “A hill of dusty ashes, rusty tins, and and broken glass…black smoke belches from the shafts and funnels.”

In her detailed description of Long Reach and some of the boats moored there, she mentions the “hulks of the Small-pox Hospital”, made up of the remains of ships Atlas, Endymion and Castalia connected by a covered way. By 1903 the ships, which were in bad condition were no longer needed, and were gradually replaced by land-based hospitals

As they approach Long Reach, while so much of what Marion has written about has long since disappeared, she describes a landscape that can still be seen today. The remains of a Neolithic – Bronze Age forest visible only at low tide. A strange and ancient landscape.
As the tide begins to flow, she looks out and wonders “how the branches and boles of trees came to the slope of stiff clay with forms the bank. […] However, here there are the trees – hundreds of them – they spread all along Long Reach, and the sea wall seems to have been built over them; and as we push slowly down against the tide we bump some of the submerged trunks which stand out from the bank here and there.”

She paints the scene as they set off for the next part of their journey towards Greenhithe: ” The air is soft and moist; the decks are soaked with dew […] The sun is a pale disc faintly seen; and floating in the air are millions of little spiders, each borne by its thread of gossamer beaded with tiny drops of dew […] The sun shines with a faint slivery light over the surface of the grey oily water.”
Marion watches and notes much of what is going on along the Thames around them. She sees a barge “drifting crab-wise across the tide; and a man in the bow with a long oar trying to keep her head in the right direction, and give her a little steerage way.” And, as they are about to anchor, a boat pulls off suddenly from the Worcester, a large ship ahead of them, and they are asked to “please not anchor over the water pipes that run from the ship to the shore.”

Warspite and Arethusa were training ships run by the *Marine Society. In the second part of the eighteenth century “Gangs of boys were collected by the Society’s agents, medically examined, clothed in sailors’ uniforms and sent on board our ships.” She explains that now: “There is accommodation aboard the Warspite for three hundred lads; but for want of funds, only two hundred and twenty have been shipped.” However the regime, doubtless fairly rigorous, met with her approval: “The difference which good food, drill and healthy exercise make in the lads is wonderful.”
Marion continues: “The Arethusa and her tender, the Chichester, belong to the National Refuges for Homeless and Destitute Children.” Over the years with the education and training they provided, though certainly tough, they rescued and gave a future to over seventeen thousand boys. She could see that they were proud of their ship and noted that they “had an excellent band, popular for outdoor fêtes“, which meant time ashore that was thoroughly enjoyed.”

As their voyage progressed towards the Nore, Marion describes in her engaging conversational style, much of what she, her husband, and family could see, together with its history and associated background. It is a wonderful record of life on and around the Thames, the Estuary, and of the social mores of her time. Later on, I shall return to share the final part of their journey.

End Notes
London to The Nore, painted and described by W. L. and Mrs Wyllie.
* The Marine Society today
Smallpox Hosptals in London.
Lead image from: Stanford’s Coloured Chart of the Thames Estuary; c. 1930s
Discover Ian Tokelove’s sites here: Remote London; Canoe London; and follow him on Twitter @iantokelove
W. L. Wyllie Short biography, some of his work, biographies and books by him at the White Dog Gallery