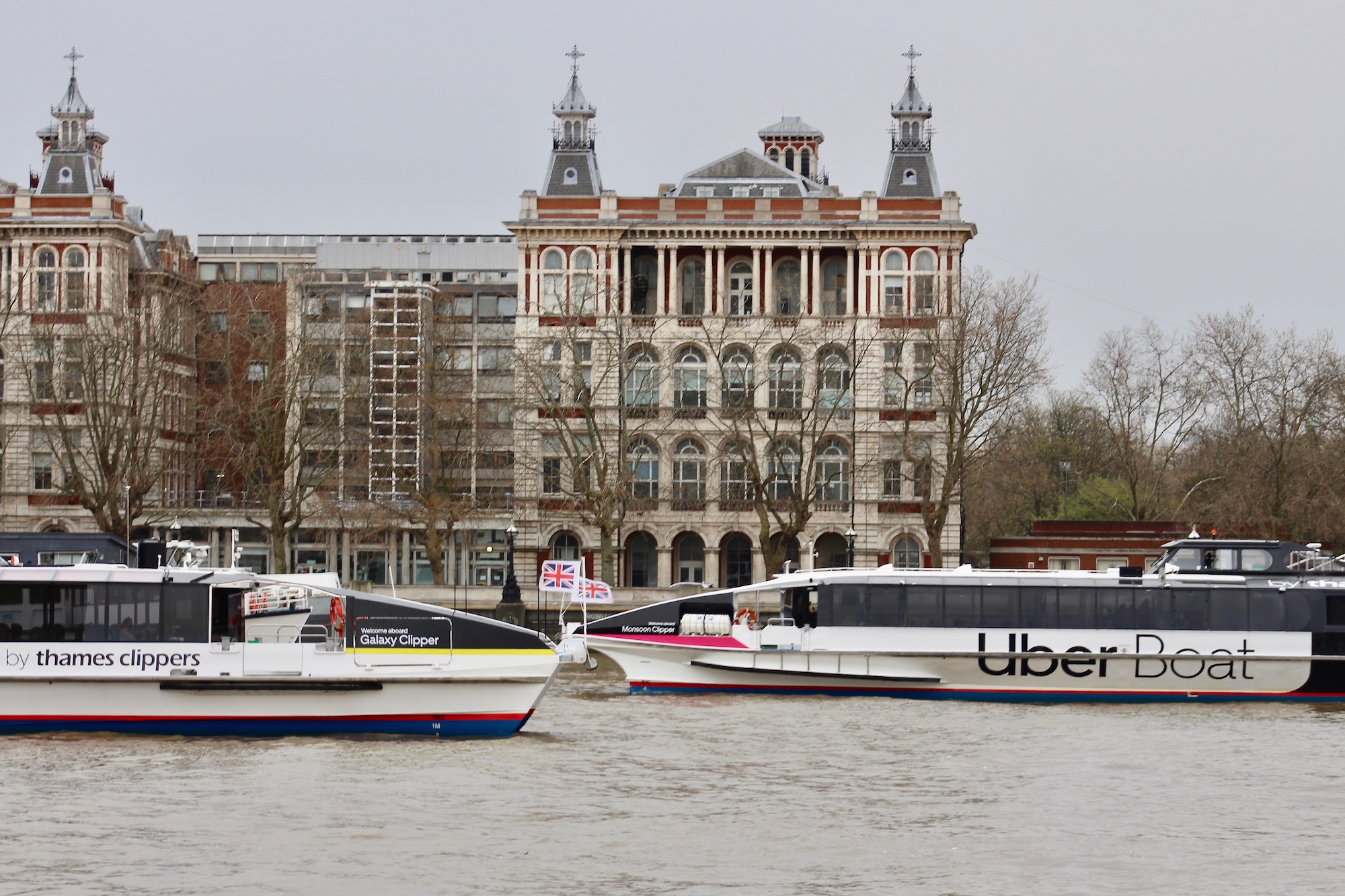 Thames Clippers is now in partnership with Uber. After an agreement finalised in August 2020, the new name of London’s river bus service is Uber Boat by Thames Clippers. The names of the twenty vessels in the fleet have remained the same and, as you may know, are weather or space themed. Each clipper has its own distinctive flash of colour painted on the bow.
When the service first started under Sean Collins and Alan Woods in May 1999, it began with three Hydrocats, SKY, STAR and STORM; which were later joined by River Runner and Hunt Class vessels, together with three other specially tasked boats. Here I have photographed and recorded all the clippers, save two, in their new livery, adding a few details, which can be further explored on Uber Boat by Thames Clippers.
Hydrocats
At the time of writing STAR and STORM Clippers are in dry dock so that SKY Clipper is the only one that I’ve seen and been able to photograph recently.

SKY, STORM and STAR were “originally built by FBM Marine, on the Isle of Wight, in 1992 for a high-speed passenger ferry service to aid the redevelopment of London’s docklands.” They joined Thames Clippers when the company was set up in 1999.

River Runners
The majority of the fleet is made up of nine River Runners: AURORA, CYCLONE, HURRICANE, METEOR, MONSOON, MOON, SUN, TORNADO and TYPHOON.

AURORA Clipper was built in Australia by Brisbane Ship Construction, as were: CYCLONE, METEOR, MONSOON, TORNADO and TYPHOON, and she joined the fleet in 2008. She is a ‘Typhoon class’ vessel and the colour on her bow is light blue.

CYCLONE Clipper joined the fleet in 2007. She is a ‘Typhoon class’ vessel and her individual colour stripe on her bow is orange.

Specially built for Thames Clippers by NQEA, Engineers and Shipbuilders in Cairns, Australia, HURRICANE Clipper joined the fleet in 2001 and was for a time their flagship. You might have seen her in another guise when she spent some time covered in Damien Hurst spots as she ran the Tate to Tate service from Tate Britain to Tate Modern, bringing both art galleries to public attention. Her bow stripe is a cheerful lime green.

Built by Brisbane Ship Construction in Australia, METEOR Clipper joined the fleet in 2008. She is a ‘Typhoon class’ vessel and her individual bow colour is bright red.

MONSOON Clipper, also built by Brisbane Ship Construction, joined the fleet in 2007. She is a ‘Typhoon class’ vessel and her individual stripe of bow colour is dark pink.

Together with her sister SUN Clipper, MOON Clipper was built by NQEA, Australia in 2001 and first operated in Belfast where MOON was known as ‘Down Runner’. She joined Thames Clippers in 2005. “Her wheel box was lowered in 2012 so that she could navigate the low-lying bridges to the west of their route more easily.” The coloured stripe on her bow is violet.

Built by NQEA, Australia in 2001, and also first serving in Belfast, SUN was known as ‘Antrim Runner’. She joined the Clipper fleet in 2005. The wheelhouses of both MOON and SUN are in the bow of each vessel. Her individual bow stripe is yellow.

TORNADO Clipper was built by Brisbane Ship Construction in Australia and joined the fleet in 2007. Her bow stripe is a minty green.

TYPHOON Clipper, also built by Brisbane Ship Construction was the first ‘River Runner’ to join the fleet in 2007. And “as a result, our six River Runner 200 Mk IIB vessels are often referred to as ‘Typhoon Class’.” Her bow stripe is purple.

Hunt Clippers
Are named after “long serving engineer Clive Hunt, who worked on many builds including both GALAXY and NEPTUNE Clippers, before losing his battle with cancer.
‘Hunt Class’ clippers have been specially designed to navigate the shallower waters and low-lying bridges to the west of their route along the river, which ends at Putney Pier. Built by Incat, Australia, renowned for the construction of high speed, lightweight catamarans, GALAXY and NEPTUNE were the first ‘Hunt Class’ vessels of the fleet.

“GALAXY Clipper and her sister NEPTUNE Clipper […] were loaded onto a cargo ship for the 10,000 mile journey to the UK. When they arrived in 2015, Tower Bridge was raised so that they could be welcomed onto the Thames in central London.” See here the excellent film on their departure from Incat. GALAXY’s Bow has a yellow stripe and NEPTUNE’s has a purple stripe.

JUPITER Clipper, and her sister MERCURY were built by Wight Shipyard on the Isle of Wight and sailed from there to London, a distance of about 200 nautical miles. Jennifer Edwards wrote in 2017 how “travelling along the English coast, the boats would sail past landmarks including Spinnaker Tower at Gunwharf Quays, Brighton Pier and the White Cliffs of Dover to their home at Trinity Buoy Wharf in East London.” She explains how “Six members of crew – with over 80 years of combined experience between them” would undertake the 12 hour journey, at an average speed of 20 knots.
JUPITER’s emblematic bow colour is gold and MERCURY’s is silver.

VENUS Clipper is the flagship of the Uber Boat by Thames Clippers fleet. She was built by Wight Shipyard in the Isle of Wight and joined the fleet in 2019 in time for the company’s 20th anniversary.
Her chosen colour is emerald green to reflect her ‘green’ credentials, being the fleet’s most ecologically advanced vessel to date.

Launched in September 2020, COMET Clipper is part of an integrated system for “small scale freight transport.” Ian Wilson, Chief Executive of DHL Express UK & I, says: “This new and unique service, combining electric vehicles, riverboat and last-mile bikes creates fast and efficient access across the capital.” This is yet another measure reducing the volume of traffic and pollution in central London.

ORION Clipper is a fast, smart, private, executive launch that can be chartered for special occasions or luxury transfers. Ben @liquid_highway1 tells me that “She was originally called H2O&M, renamed OGILVY & MATHER, and changed again to OGILVY by 2005.” An impressive speedboat, she could reach Canary Wharf from the Embankment in fifteen minutes. Ben adds, “Thames Clippers bought her about 3 years ago, overhauled her and renamed her ORION Clipper.”

In service as a ferry for over forty years TWINSTAR Clipper began by carrying staff between the Ford Dagenham factory and Belvedere. She now carries hotel guests, visitors and commuters between Canary Wharf and Rotherhithe.

The clippers are very active over their stretch of the Thames, so if you’re walking along the banks of the river in central London, you are bound to see at least one, if not more. And better still, as life is getting back to normal, treat yourself to a trip on the river. You’ll see the centre of London from a totally different perspective.

Further Information and sources
Discover routes and ticket information on Uber Boat by Thames Clippers, details of private hire for social or corporate events, and up-to-date Covid guidance and measures taken on the fleet.

Liquid Highway is the leading resource for the latest news on the River Thames. You can see their extensive photo gallery here.
———————————————
If you would like to experience a journey from a few years back, see ‘Inside Thames Clippers’. Sean Collins interviewed by Alastair Greener in 2013.

Evening Standard Magazine: ‘A Day in the life of the River Thames: 24 hours spent on its waters’ by Frankie McCoy, July 18, 2019.