A giant bicycle wheel on the banks of the Thames.
This is London’s  Eiffel Tower or Brussels’ Atomium. I love it.  Though not everyone did when it was first built in 1999.

Now an integral part of London’s modern skyline and an accepted symbol of our city, the London Eye, originally known as the Millennium  Wheel, was first seen by many as  a ‘white elephant’ and an oversized fairground attraction, devaluing the surrounding buildings. Having never had much time for the grandiosity of the old County Hall,  I would disagree.

One of its fiercest critics was Lord St John of Fawsley, Chairman of the Royal Fine Art Commission from 1985 to 1999. Clearly not a fan, he said it “would ruin London” and that he hoped it would “be moved to a more suitable site at the earliest possible moment”. Nearly twenty years later, it is still looking out over London. And London is looking back at it as it turns by day, gleaming in the light with cameras flashing from the capsules, often messaging us with coded night-time illuminations including: red and gold to mark Chinese New Year; rainbow colours for Gay Pride; pink for Valentine’s  Day; and red, white and blue to mark the birth of Prince George. But perhaps its most famous image is at the centre of London’s spectacular annual New Year’s firework display.

Architect David Marks designed the Eye in 1993 with his wife and partner, Julia Barfield, for a competition in the Sunday Times to mark the millennium. But no winner emerged. After all their work, and with great faith in the project, they set about developing it themselves; found the site on the Southbank; mortgaged their home to pay for the initial costs and found financial support from Bob Ayling, head of British Airways.  It took about six years to build. And in recognition of their original sponsors, though since then changed, the rides around the wheel are still called flights. There are thirty-two pods representing all London’s boroughs from Barking to Westminster. However allowance has been made for the widely held superstition that the number thirteen is unlucky, so that the pods are numbered 1 – 33.

Six European countries were involved in the construction. The steel was British but sent to Holland for manufacture; the cables were Italian; the bearings German; the spindle and hub were cast in the Czech Republic, the pods made in France with Italian glass; and the electrical parts came from the UK. When ready, everything was floated up the Thames by barge and assembled at the site. No easy feat as the sections were large, and careful attention had to be paid to the tides so that there was enough clearance to pass beneath the bridges.

The Eye has added interest and variety to London’s skyline, enhancing views  from all over the city and specially along the Thames, where its  ever changing reflection adds a magical glow to the river. 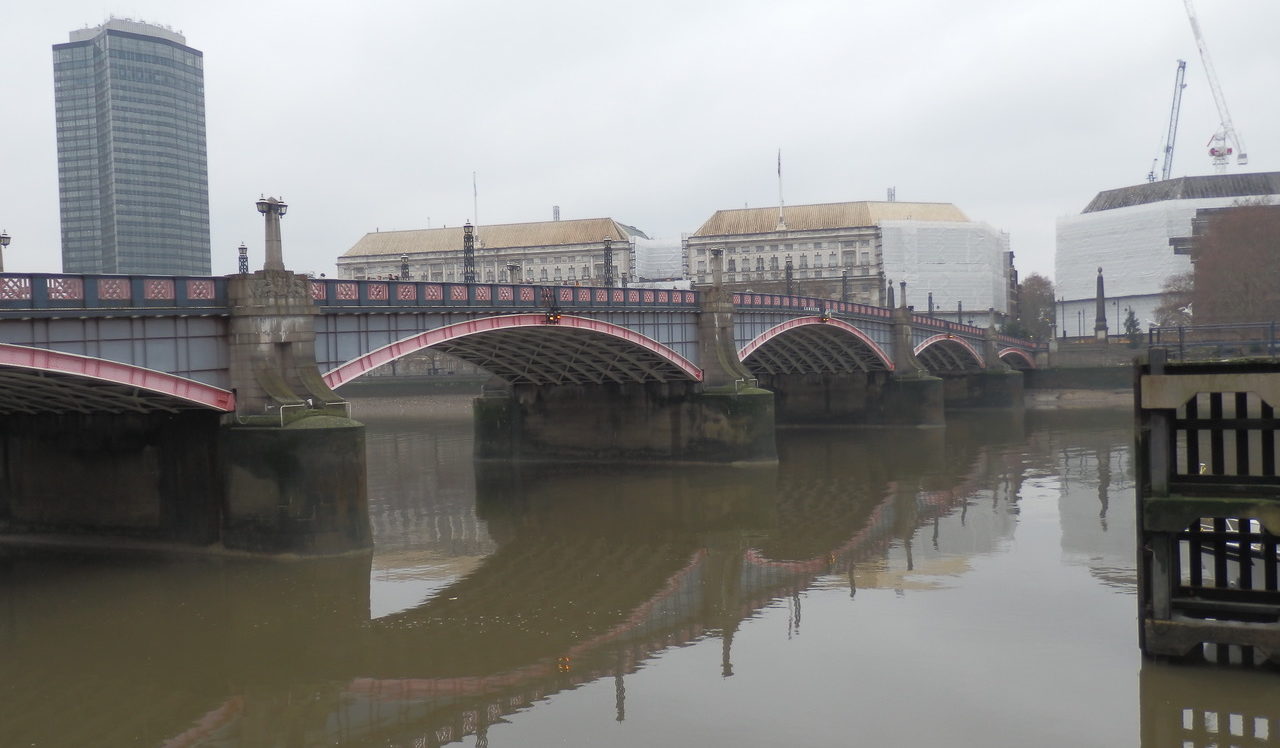 Among the many bridges that keep London stitched together, Lambeth Bridge is one of my favourites.
It’s the one I see most often, in all weathers and in all moods.

Day and night, the Thames beneath is in near-constant movement, lively or quiet, tides high and low and with ever changing lights and reflections.

Though there was a ferry crossing point here for many years connecting Lambeth Palace to the Westminster side of the river, it wasn’t until 1862, after much pressure, that the first Lambeth Bridge was built. Sadly, in competition with the new Westminster Bridge completed in the same year, it was not a success either commercially or aesthetically.

In his “Dictionary of the Thames” Charles Dickens Jr. wrote that “Lambeth Bridge is perhaps, on the whole, the ugliest ever built.” And a comment in the Observer on May 15, 1910 was equally unflattering “It has rightly been described as ‘the work of an engineer insufficiently experienced in bridge design.” And it was that which led to its downfall. It was built on the cheap, badly finished, susceptible to rust, too narrow, and the hoped for profits from the crossing toll never materialised. Safety eventually became a serious concern and it was closed to traffic in 1910, though pedestrians could still cross the river there.

Plans to build a new bridge in its place were shelved during the First World War and then delayed, so it wasn’t until July 19th, 1932 that construction of the bridge we know now was finished and officially opened by King George V. A journalist from The Manchester Guardian felt “a Parisian glitter in the air” and the crowds, including Lambeth and Westminster schoolchildren, as having “all the richness of a ‘close-up’ of an Impressionist painting.” It was a day to remember.

George Humphreys, Chief Engineer of the London County Council and his team produced the elegant design. It was carried out by Dorman, Long & Co., well-known at the time for building the Tyne Bridge in Newcastle and Sydney Harbour Bridge.

Stretching across the Thames, it’s five steel spans, supported by stone piers and framed by a cast iron balustrade, is embellished with double lamps set on granite pillars, a further set of lamps set on steel lattice-work pillars, and adorned at either end with two obelisks, each topped by a golden pine cone finial or pineapple with acanthus leaf decoration, a design very popular at the time.
The now faded red paintwork on parts of the bridge is said to be a nod towards the red-coloured benches in the House of Lords.

Lambeth Bridge miraculously escaped the bombing in WW2, and was eventually Listed as a Grade II structure of ‘special interest’ in 2008. After the Westminster and London Bridge terror attacks in 2017, safety barriers were swiftly installed for the protection of pedestrians. It is to be hoped that when funding and priorities permit, these will be replaced by something more attractive.

Life is often so rushed that we only have eyes for the road ahead but if you can, take a walk in Victoria Tower Gardens, North and South, or cross the river to the Lambeth side, and pause for a while to let your thoughts flow with the water as it streams beneath this elegant bridge.