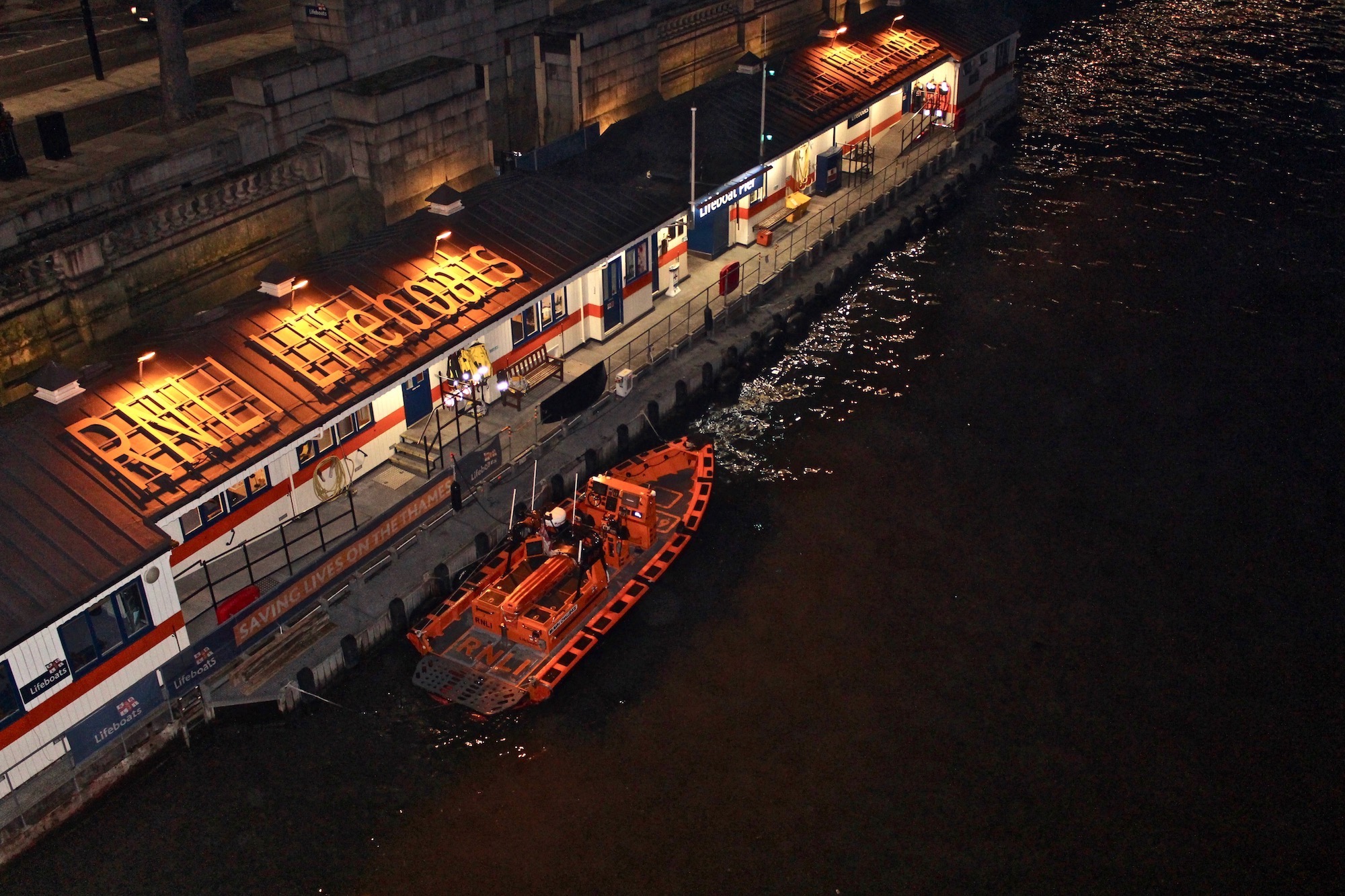 In need of a new home…

Night and day, throughout the year, the permanent and volunteer RNLI crews at Tower Lifeboat Station, afloat on the central London tidal Thames, are ready to come to the rescue of anyone in trouble on the river. Since opening on January 2nd in 2002, they have had nearly nine thousand call-outs for various emergencies, and their intervention has actually saved 346 lives so far. Covering the river between Battersea and Barking Creek, they liaise, and often work closely with the Metropolitan Police Marine Policing Unit; the London Fire Brigade’s Lambeth fire boats; the London Port Authority; and the other three RNLI lifeboat stations watching over the Thames from Teddington, Chiswick, and Gravesend. They also work closely with the London Ambulance Service, who are on hand to take over care of casualties.
Tower Lifeboat Station is the busiest in the UK. There are ten full time crew members and fifty-five volunteers, each serving at least two twelve-hour shifts a month, ensuring that the station is always manned and the lifeboat ready to launch within ninety seconds of a call.
However, now their floating accommodation has more or less come to the end of its useful life and is in urgent need of replacement. The building rises and falls about seven metres with each tide, and passing boats cause it to bang, clang and crunch against the river wall, so that the damage inflicted over the years is now beyond repair. Added to that, the accommodation is cramped and crews are unable to rest properly during long shifts. They also need more room to attend to casualties in a private space before their transfer to an ambulance to take them on to hospital.

A Little History
Rob Jeffries, curator of the Thames River Police Museum at Wapping, and ex-member of the River Police, has kindly given me some historical background to this landmark structure on the Thames and how it came to be the home of the Tower RNLI Lifeboat, having served before as a Police Station.
The Thames Marine Police Force became an official, government funded body in 1800 and were based on the riverside at Wapping. However they eventually needed more cover for their extra duties and “in 1817 the Marine Police acquired a couple of ex-Royal Navy vessels, taking the ‘hulks’ and converting them into floating Police Stations, one at Blackwall and one closer to Westminster.”
In 1870 the Thames Division took control of a pier close to Somerset House, owned by the Thames Conservancy, which had been a landing stage for steamboat passengers. With a large sign saying Thames Police Station, it was known as Waterloo Pier, before eventually becoming the present home of the Tower RNLI Lifeboat Station. Rob tells me “the living quarters were at the down river end of the pier, and included the home of Chief Inspectors when in charge of the station, and their families. I remember, I was on duty one day when an elderly lady arrived and asked if she could see the rooms where she was raised as the young daughter of a former Chief Inspector on Thames Division.”

Having heard from someone about floral displays on the pier, I asked Rob about this to which he replied that he didn’t know “how, why, or when the tradition started but the Met. Police used to have a Gardens Competition. It seems that in order to encourage other stations to partake, a Flower Pot or Window Box section was added to the categories, and at one time the Waterloo Pier used to enter in that section and, by all accounts, used to do quite well.”

Rob continues: “In the years following the Marchioness Disaster of August 20th, 1989, there were increased calls for a dedicated search and rescue service on the Thames in Central London.” Up until then it had been the river police who carried out rescue and recovery missions as just one part of their duties. Finally the RNLI was asked by the UK Government to provide a dedicated lifeboat cover along the tidal Thames. They were originally based at Tower Pier next to the Tower of London but they had to share the pier and its facilities with a number of others. When Waterloo Pier ceased operation as a Police Station, it began to deteriorate and as the RNLI were in need of their own space, they were able to take it over for a nominal price of £1.00. Rob explains: “A representative from the RNLI duly handed over a £1.00 coin to an inspector of the Marine Support Unit on the agreed handover date and the Inspector promptly handed the coin back as a ‘Donation’ to the RNLI charity.”
Though the Pier only cost the RNLI £1.00, they had to fund the sizeable cost of refurbishment, much of which came in donations. And, though having moved to below Waterloo Bridge, it was decided to keep their already established name of ‘Tower RNLI’ to avoid confusion, and to call their pier ‘Lifeboat Pier’.

The Waterloo Pier as a Police Station, in the picture above, was painted by Mackenzie Moulton in 1983 for Sergeant David Noall, one of his friends working with him for the Thames Police Force. He tells me that “the green launch on the right, was nick-named, the Green Parrot, but it was officially the Commissioners’ launch, used by senior officers visiting Thames Police Stations.” Joining the Met. at 19, his last thirteen years of service were spent in the Underwater Search Unit based at Wapping, London, a difficult, dangerous, and often distressing job, including the harrowing search for victims of the Marchioness disaster in 1989. He painted throughout his career in the Police, perhaps as an escape from some of the horrific sights he came across as police diver, and has been a successful artist for sixty years. Four of his paintings now hang in the Thames River Police Museum.

Appeal for the future
Whether you’re a riverside worker, or dweller, a Londoner, or visitor, you might one day have need of rescue along the central London Thames but even if not, your support for the Appeal (see link below) will mean that others will have the benefit of a swift and professional rescue.
“The target is £33,000 and this, along with other generous donations, will fund the £8.2 million (correct as of 5 August 2021) project to commission, prepare, and build the new RNLI Tower Lifeboat Station. Any funds raised over the full cost of the project will be used to fund other lifesaving activity. If not enough money is raised then general funds will be used for the balance of the project.”
The present Tower Lifeboat Station structure, though only twenty years in operation as part of the RNLI is in fact, as you have seen from its history, over 150 years old and beyond repair. A new station is needed with some urgency.
As mentioned above, Tower Lifeboat Station covers the sixteen miles between Battersea and Barking Creek and the demands on crews along this dangerous stretch of the river are extensive. They have to contend with the constant changing levels of the tides, which rise and fall as much as seven metres, and a tidal flow of more than five miles an hour, which means that they have to be aware of, and deal with, the way in which currents flow through the many bridges, piers, fixed obstacles along their sector, and numerous floating hazards.
Tower Lifeboat crews have attended to casualties on both leisure and commercial boats as well as casualties injured on some of the construction sites along the river. They are well-prepared and trained, and have carried out joint exercises with Thames Clippers and Cory tugs among others. They also frequently speed to the rescue of smaller craft such as motorboats, canoes, rowing boats and dinghies as well as people, cut off by the tide or, who by accident or design, find themselves in the cold waters of the river, where the average temperature is 12 degrees centigrade and survival can be as little as fifteen to twenty minutes. Their shouts are always a race against time.
Many voices from across London and beyond, have joined in to appeal for help in funding a new Tower Lifeboat Station, which will include much-needed modern facilities such as private, purpose-built spaces for casualty care, a drying room for kit, up-to-date equipment, more comfortable accommodation for the crews, and a new area for public engagement.

Holly McGlinchey adds her voice to the Appeal: “Now that I’m on crew, I love being part of the team and am so proud of the vital work that we do. But we need to carry on doing our lifesaving work in a station that is fit for the future. Our current station is old, cramped and lacks the proper facilities that we need. Please donate to our appeal so that we can have the station we deserve.”
See here how Holly helped save a life and became inspired to volunteer for the RNLI. She is now a valued member of the Tower Lifeboat crew.

To help build the new Tower Lifeboat Station please click donate and, as full-time crew member Chris Walker says:
“Be part of an enduring legacy that will make the Thames a safer place for everyone now and for years to come.”